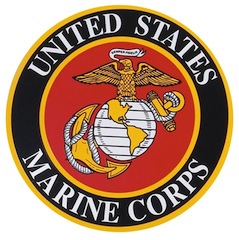 “Putt! Putt! Putt! Putt!” Imitating the sound of a Curtiss Condor’s engines failing, Frank Baron Jr. mimics the tumbling motions of the aircraft falling from the sky. His hands rush to his shoulders as if grabbing for parachute straps.

“I thought, ‘This is it,’ and then all of a sudden, brrrr!” he said, describing the sound of the engines returning to life as he sinks into the back of the couch, grinning, but sighing with relief.

“That’s the most scared I ever was, and I love to fly,” said Baron, 98, who’d served as an airplane rigger during a crucial period in the evolution of U.S. Marine Corps aviation. Baron’s love for the Marins was sparked in Glen Burnie, Md., where he was born April 18, 1914.