I grew up during an exciting time for aviation. My first recollection of flying was at about 10 years old when I shook Lucky Lindbergh’s hand. In fourth grade I won a model airplane contest, and the prize was my first ride in an open cockpit plane. I had no goggles. When I raised my head up above the windshield, the air felt like it blew in behind my eyeballs!

When the Japanese attacked Pearl Harbor, I was a freshman at Columbia University. By the time June came around, it seemed to me and a lot of the other guys that school was pretty darn irrelevant. A number of us decided to join the Army Air Corps. So, one July day in 1942, we went down to Whitehall Street in New York City to an Army Recruiting Center, where we signed up. We were sent to Governor’s Island in New York for a physical. In September, we received letters to report. I went to the Armory in Newark and got on a train heading for Keesler Field. 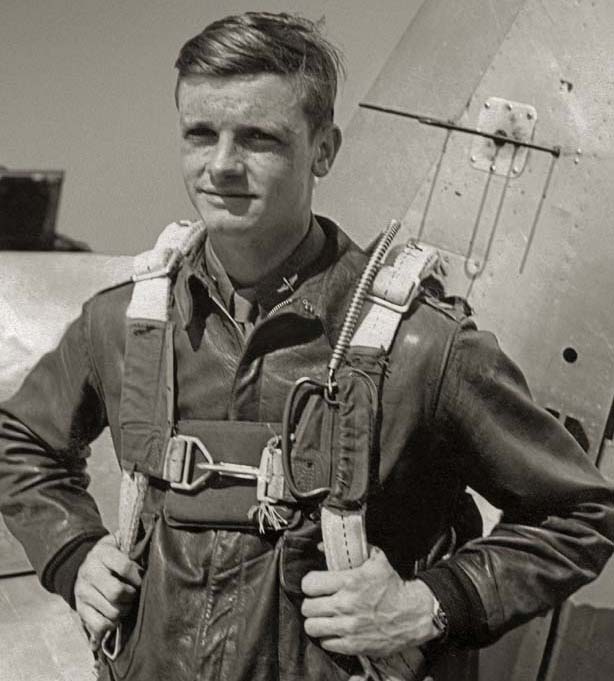 After completing training, I received my orders to go to England. We took a freighter in a convoy to France on January 3, 1945. From there we were flown to London. I was assigned as a replacement pilot to a P-51 Mustang Group: 339th Fighter Group, 505th Squadron in Fowlmere, England. The other Squadrons of the Group were the 503rd and the 504th. We replaced pilots who had either completed their tours or were killed or missing in action. Upon reporting to Fowlmere Squadron Headquarters, I was taken to a quonset hut and shown to my bunk. There on the bunk was a B2 jacket, which everyone really coveted. The bunk and jacket had belonged to the pilot I had replaced, Capt. Richard Olander, who had been killed in action. He had not assigned the jacket to be sent home, so I ended up with it. Many years on at one of our Squadron Reunions and by total coincidence, I met his niece.

The Sergeant took me down to the flight line. The Group was off on a mission. One of the guys saw me standing there and came up and said, “Why don’t you go sit in a P-51?” I got in and sat down, getting familiar with the cockpit and was in awe. It was the 51, the plane everyone wanted to fly! This was no P-40. Then he said, “Why don’t you get a parachute and take a flight?” We went over all of the controls. He gave me directions. I started the engine and taxied. I was nervous as hell. I took off, scared to death that I wouldn’t be able to find the field again.. There were so many other airfields in the area with other fighter and bomb groups. I circled the field a couple of times and landed. That was good enough for me that day. After that, it was a few more days flying with guys from the Group as orientation. Everybody said, you’ll get Channel Fever, the fear of crossing the channel toward enemy territory. We had one guy who, anytime he had a mission, would turn back. He was sent somewhere else and not as a P-51 pilot. He washed out. It was fear. Then came my first mission. My ship was the “Iron Bird”. I never had Channel Fever. My biggest concern? I told myself, “Don’t screw up!”