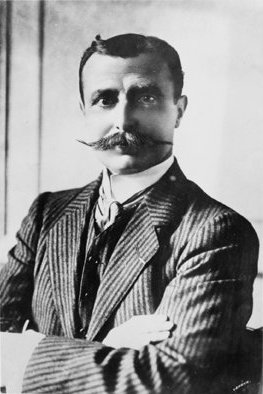 1872 – Louis Blériot (shown above), the pioneer aviator who made the world’s first airplane flight across the English Channel, is born in Cambrai, France.

1915 – German Air Service Leutnant Kurt Wintgens achieves the first aerial victory by a true fighter plane in history when he downs a Morane-Saulnier two-seat observation aircraft with his Fokker M.5 K/MG production prototype of the Eindecker. He later becomes a fighter ace.

1968 – Seaboard World Airlines Flight 253A, a Douglas DC-8, is forced to land in the Soviet Union; on board are more than 200 American troops bound for Vietnam.

1976 – The National Air and Space Museum (NASM) of the Smithsonian Institution opens in Washington, D. C.. It is a center for research into the history and science of aviation and spaceflight, as well as planetary science and terrestrial geology and geophysics.

2002 – America West Flight 556, an Airbus A319, is ordered back to the terminal at Miami before take-off after security screeners report that the pilots appear intoxicated; the pilots are eventually given prison sentences.