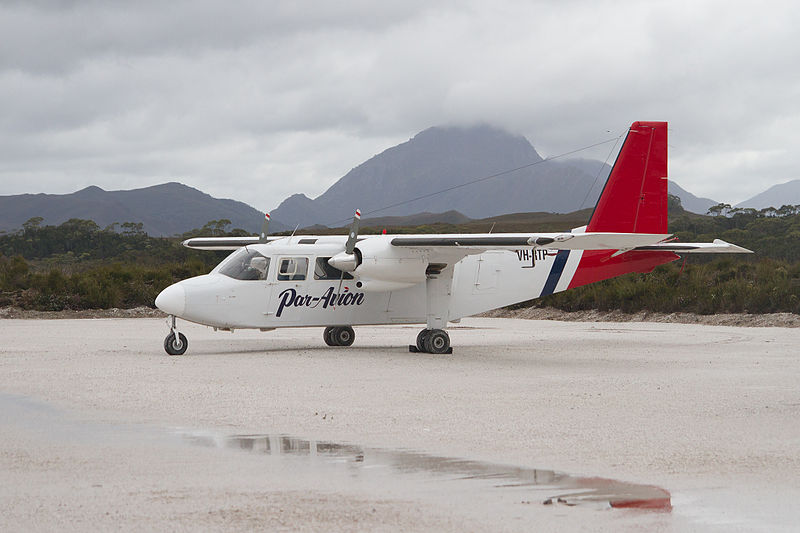 1897 – Death of Friedrich Hermann Wölfert, German publisher and aviation pioneer, and his mechanic. They are killed in an accident when their airship “Deutschland,” powered by petrol, caught fire at a demonstration at a Tempelhof field.

1943 – The Heinkel He 219 Uhu, a German night fighter, makes its combat debut in the early morning hours in an experimental flight piloted by Werner Streib. The Luftwaffe major shoots down five British bombers in a single sortie, but his twin-engined plane is wrecked in a landing accident when he returns to base.

1965 – First flight of the Britten-Norman BN-2 Islander, a British light utility aircraft (shown above), regional airliner and cargo aircraft, that remains in production today; to date, more than 1,200 have been built.

1979 – The first human-powered aircraft to cross the English Channel is the Gossamer Albatross, designed and built under the leadership of Paul MacCready. Flown by bicyclist Bryan Allen, it crosses from Folkestone, England to the French coast in two hours, 49 minutes.

1999 – A Russian Air Force Sukhoi Su-30MKI demonstrator crashes at Le Bourget Airport in France during the Paris Air Show. At the completion of a downward spiralling maneuver, the tail contacted the grass surface. The two crewmen eject unharmed.