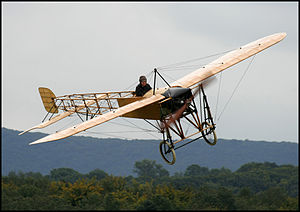 1909 – First flight of the Blériot XI, light and sleek monoplane constructed of oak and poplar. The flying surfaces were covered with cloth. One of the most successful monoplanes designed and built before WWI.

1929 – Clennell Haggerston “Punch” Dickins delivered the first airmail to Canada’s Northwest Territories on a flight into the high Arctic, travelling through Fort Simpson, N.W.T., and into Aklavik on the Arctic Circle.

1951 – Birth of Chesley Burnett “Sully” Sullenberger III, American airliner pilot, safety expert, and accident investigator, famous for having ditched an Airbus A320-214 in the Hudson River off Manhattan, New York City, saving the lives of all 155 people on the aircraft.

1961 – Death of Redford Henry “Red” Mulock, first Canadian World War I flying ace and the first in the Royal Naval Air Service, as well as the highest ranking ace.

2007 – First flight of the Lockheed Martin CATBird, a Boeing 737-based avionics testbed.