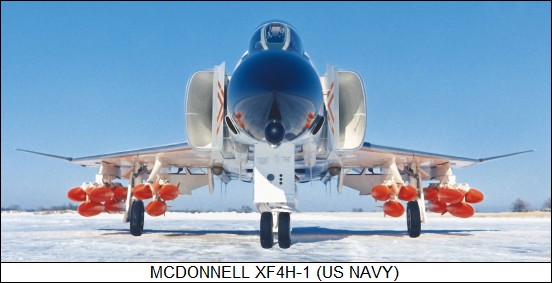 1924 – Adrienne Bolland wins the women’s record for looping from Laura Bromwell, performing the feat 212 times in just over an hour in her Caudron 127 in Paris.

1958 – First flight of the McDonnell XF4H-1 (shown above), an American all-weather, long-range jet interceptor fighter and fighter-bomber; it is the prototype of the McDonnell Douglas F-4 Phantom II.

1999 – An Indian Air Force Mikoyan-Gurevich MiG-21MF is shot down by a Pakistani FIM-92 Stinger while searching for another downed pilot during the Kargil conflict. Although MiG-21MF pilot Ajay Ahuja ejected safely, Pakistan claimed he had been killed. After his body was returned on May 28, bullet wounds suggested he had been shot after ejecting. This was the first time since 1971 India had lost an aircraft to hostile fire.