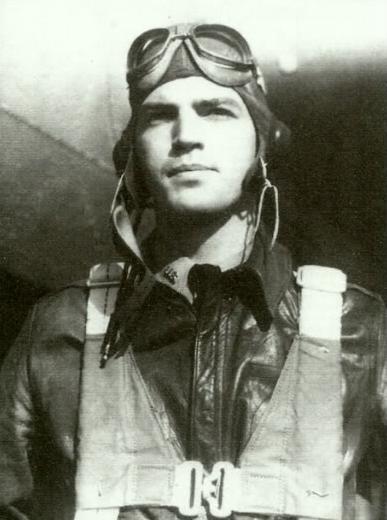 1915 – Birth of Colin Purdie Kelly, Jr. , American World War II bomber pilot (shown); he became one of the first heroes of the war for sacrificing his own life to save the crew of his dying Boeing B-17 Flying Fortress.

1944 – Death of Izidor Kovarik, Slovak World War II fighter ace who served on the Eastern front with the Axis Forces; he is killed with the student he was teaching in the crash of their Gotha Go-145 biplane trainer.

1957 – The Battle of Britain Memorial Flight is formed at RAF Biggin Hill in England as the “Historic Aircraft Flight” when three Supermarine Spitfire PR Mk.XIXs (PM631, PS853 and PS915) arrive from Woodvale via Duxford to join the sole surviving Hawker Hurricane (LF363).

2012 – Swiss pilot Carlo Schmid takes off in a Cessna 310 from Dubendorf for a solo round-the-world flight attempt.