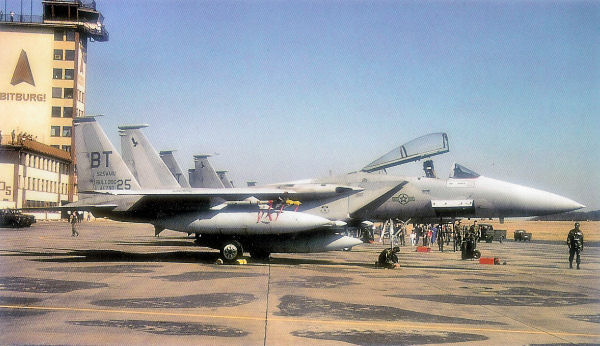 1903 – James S. Russell, U.S. Navy admiral and pilot, is born. He was instrumental in the capture of the Aleutian, or Koga’s, Zero, a Japanese fighter plane which crash-landed on Akutan Island, Alaska Territory, during World War II. It was captured intact in July 1942 and became the first flyable Zero acquired by the U.S. during the war.

1919 – The first regular international commercial route opens between Paris, France, and Brussels, Belgium, flown by an Farman F.60 Goliath of what would become Air France.

1982 – The Space Shuttle Columbia is launched; known as STS-3, this mission will end with the first and only landing at White Sands, New Mexico.

1991 – A U.S. Air Force McDonnell Douglas F-15C Eagle (shown above) downs an Iraqi Su-22 with a missile. Another Su-22 accompanying the first one crashes while maneuvering to evade the approaching F-15C.