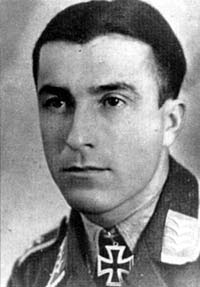 1945 – Death of Otto “Bruno” Kittel, German World War II flying ace (shown above). On his 583rd combat mission, he was shot down and killed by the air gunner of a Ilyushin Il-2 Shturmovik. He had 267 aerial victories.

1980 – Japan Air Lines begins commercial operations with the highest-capacity airliner ever put into scheduled service at the time, conducting the inaugural flight of eight Boeing 747SRs. The aircraft has seating for 550 passengers, 45 in the upper deck.