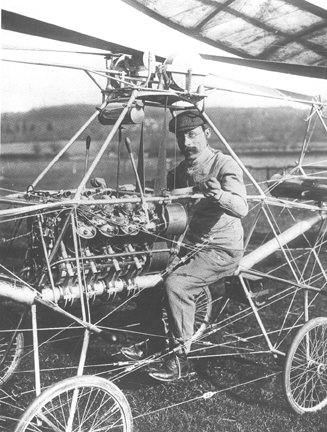 1907 – The first free flight of a rotary-wing aircraft takes place when the Cornu helicopter, a French experimental craft, lifts inventor Paul Cornu (shown above) a foot above the ground for 20 seconds.

1942 – A U.S. Navy Vought OS2U Kingfisher floatplane rescues U.S. World War I ace Eddie Rickenbacker and two other survivors of a ditched Boeing B-17D Flying Fortress from a life raft; they had been adrift in the Pacific for 22 days.

1944 – Civil air services to London are restored with the first flights carried out by Railway Air Services.