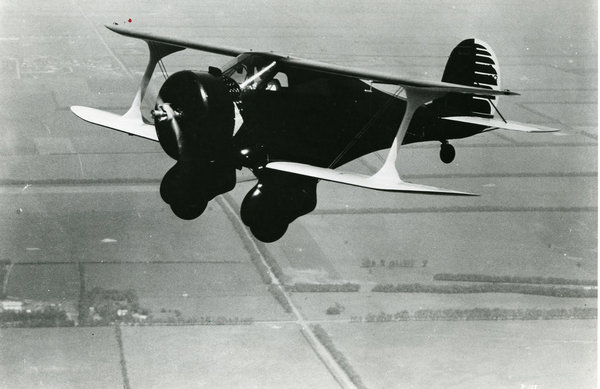 1909 – As a joke to prove pigs could fly, British aviator John Moore-Brabazon put a small pig in a wastepaper basket tied to a wing strut of his Short Biplane No. 2; the flight may have been the first to haul live cargo.

1932 – First flight of the Beechcraft Model 17 Staggerwing (shown above), an American bi-plane with an atypical negative stagger.

2008 – A Learjet 45, operated by the Mexican Interior Ministry, crashes in central Mexico City during rush-hour traffic; all eight aboard, including Mexican Secretary of the Interior Juan Camilo Mouriño, as well as seven people on the ground are killed. The Learjet apparently suffers violent wake turbulence caused by a larger jet; the smaller plane goes inverted into a nose-down attitude before impact.