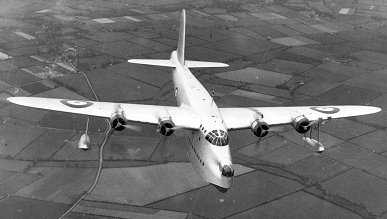 1912 – The first aerial bomb is used by Bulgarian Air Force pilots Radul Milkov and Prodan Toprakchiev on the Turkish railway station of Karaagac (near Edirne) during the Balkan War; it is the first use of an airplane (in this instance a Albatros F.II) as a bomber.

1939 – The Luftwaffe attacks its first British targets of World War II: Royal Navy warships in the Firth of Forth. During the attack, Royal Air Force Supermarine Spitfires of No. 602 Squadron claim the first German aircraft, an Heinkel He 111 bomber, to be destroyed over the UK.

1963 – In Operation Greased Lightning, U.S. Air Force Maj. Sidney J. Kubesch flies a Convair B-58 Hustler belonging to the 305th Bombardment Wing at Bunker Hill Air Force Base, Ind., on an 8,028-mile trip from Tokyo to London in 8 hours, 35 minutes. The B-58 uses five inflight refuelings and records an average speed of 938 mph.

1972 – A twin-engine Cessna 310 disappears during a flight from Anchorage to Juneau, Alaska. On board are Hale Boggs of Louisiana and Nick Begich of Alaska, both U.S. Congressmen; no wreckage or bodies are found.  The accident prompts Congress to pass a law mandating emergency locator transmitters in all U.S. civil aircraft.