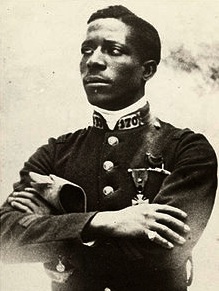 1890 – First flight of the Ader Éole, a French steam-powered aircraft; it flies about 164 feet at the Chateau d’Armainvilliers in Brie, reaching an altitude of about 8 inches. It’s considered by some to be the first true aeroplane, given that it left the ground under its own power and carried a person through the air for a short distance.

1894 – Birth of Eugene Jacques Bullard (shown above), American aviator; he was the first African-American military pilot in history and one of only two black combat pilots in World War I.

1957 – A Boeing DB-47B Stratojet, taking part in a demonstration at Pinecastle Air Force Base in Florida, suffers wing failure during the annual Strategic Air Command Bombing Navigation and Reconnaissance Competition. The aircraft comes down north of downtown Orlando, killing four crewmen. Details of the accident remained classified for five decades, presumably because they would reveal flaws in the aircraft, but an investigation disclosed later laid blame on the pilot.

1999 – Completing a career during which she set scores of speed and altitude records, the Lockheed SR-71 Blackbird makes its final flight.

2004 – Death of Maxime “Max” A. Faget, American engineer; he designed the NASA Mercury capsule and contributed to the later Gemini and Apollo spacecraft as well as the Space Shuttle.