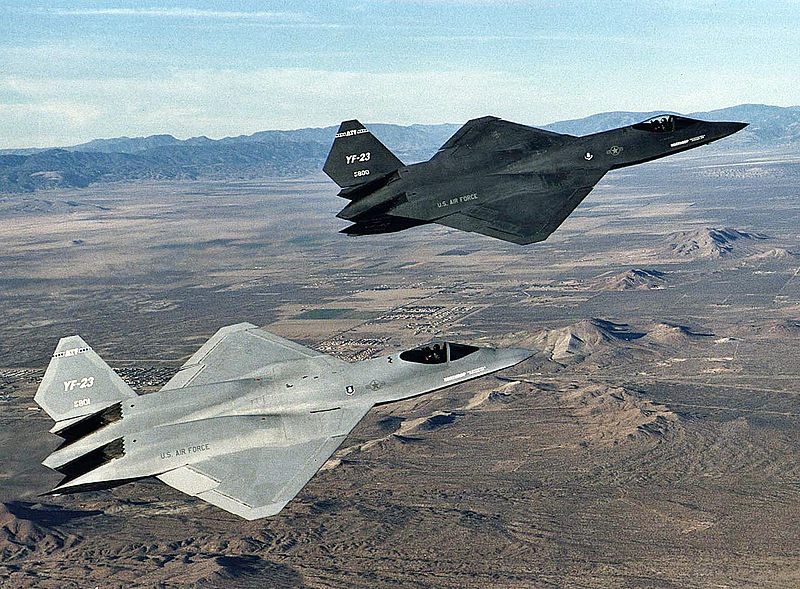 1877 – Birth of Charles Stewart Rolls, British motoring and aviation pioneer. Together with Frederick Henry Royce, he co-founded the Rolls-Royce, a company that first makes automobiles and later, after Rolls’ death, airplane engines.

1913 – Russian Army Lt. Pyotr Nesterov performs the first loop-the-loop with a Nieuport IV in Kiev. The complete circle and other intentional acrobatic stunts prove to be valuable experience for the wartime maneuvers needed during aerial battles.

1941 – A German Type VIIC U-boat, U-570, is attacked by two Royal Air Force Lockheed Hudsons off Iceland; the submarine is so heavily damaged it cannot submerge, so it surrenders to one of the Hudsons, piloted by Squadron Leader J.H. Thompson, which continues to circle the aircraft until relieved by another aircraft.

1990 – First flight of the Northrop YF-23 (shown above), an American single-seat, twin-engine fighter aircraft prototype that was not chosen for the  U.S. Air Force Advanced Tactical Fighter competition.

2006 – Comair/Delta Connection Flight 191, a Bombardier CRJ-100ER, crashes on takeoff from Blue Grass Airport in Lexington, Ky.; only the first officer, flying the jet from a closed runway, survives.