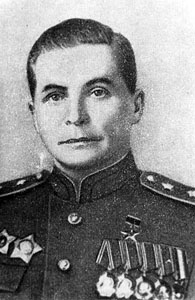 1834 – Birth of Samuel Pierpont Langley, American astronomer, physicist, inventor of the bolometer and pioneer of aviation.

1909 – The first international aviation meeting begins in Bétheny, France; 23 European airplanes make 87 flights during one week and the meeting will have a strong influence on the technical and military aspects of flight.

1914 – An Avro 504 on patrol over Belgium is shot down by German rifle fire, the first Royal Flying Corps aircraft destroyed in action.

1989 – Death of Alexander Sergeyevich Yakovlev (shown above), Soviet aeronautical engineer and airplane designer. He designed Yakovlev military aircraft and founded the design bureau that bears his name and survives today as the Yakovlev Aircraft Corp.

1999 – China Airlines Flight 642 (operated by Mandarin Airlines), a McDonnell Douglas MD-11, crashes at Hong Kong International Airport while landing during a typhoon. Despite touching down hard, flipping over and catching fire, only three of 315 people onboard were killed.