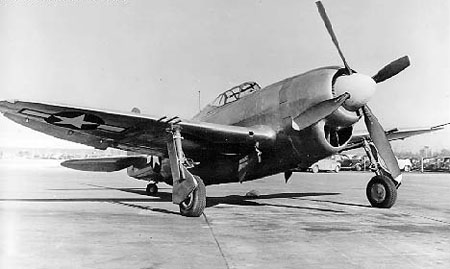 1896 – Birth of Cyril Frank Uwins, a British record-breaking test pilot for Bristol Aircraft; he would eventually fly 58 different types of airplanes before the end of his career.

1909 – The first flying machine purchased and put into service by a government is a Wright Flyer; the U.S. Army accepts its first airplane, as “Signal Corps (S.C.) No. 1,” and pays the Wrights $25,000, plus a $5,000 bonus, because the machine exceeded the speed requirement of 40 mph.

1944 – The Republic Thunderbolt XP-47J (shown above), fitted with a General Electric CH-5 turbosupercharger, achieves a top speed of 505 mph in level flight, making it one of the fastest piston-engine fighters ever built.

1973 – Albert John “Ajax” Baumler, an American flying ace during the Spanish Civil War and World War II, dies; he is the first American pilot credited with destroying aircraft of all three Axis powers.

1985 – Delta Air Lines Flight 191, a Lockheed L-1011 TriStar, crashes within inches of a runway at Dallas-Ft. Worth International Airport, exploding and killing 133 persons, including the driver of a car on a nearby freeway who had been struck by the plane just before it exploded.

2010 – First successful flight of a human-powered, flapping-wing aircraft. Todd Reichert of the University of Toronto Institute for Aerospace Studies pilots a human-powered, 92-pound ornithopter named Snowbird in Ontario, Canada, sustaining 19.3 seconds of flight while covering a distance of 475 feet.