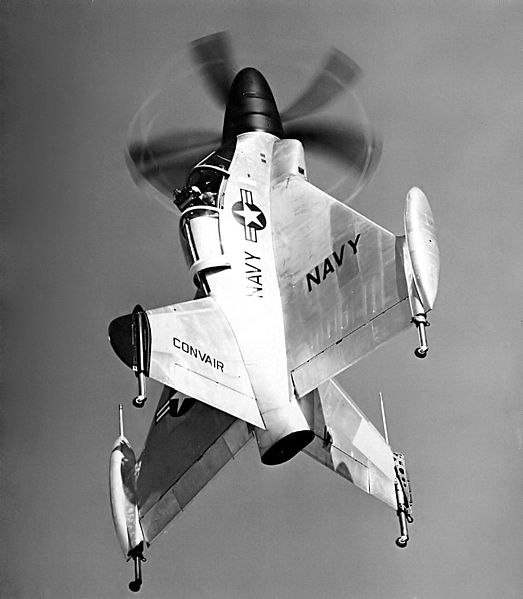 1911 – Harriet Quimby, a drama critic, becomes the first woman in the U.S. licensed as a qualified pilot.

1913 – Birth of Hiromichi Shinohara, known as the Richthofen of the Orient and the highest-scoring fighter ace of the Imperial Japanese Army Air Service.

1943 – Operation Tidal Wave, a large-scale air attack by bombers of the U.S. Army Air Forces on nine oil refineries around Ploesti, Romania, is made by Consolidated B-24 Liberators.

1954 – First vertical flight tests of the Convair XFY Pogo (shown above), with its vertical takeoff and landing capabilities, the Pogo is intended to be a high-performance fighter aircraft capable of operating from small warships.

1981 – Death of Julius Arigi, Austro-Hungarian World War I fighter ace and co-founder of Ikarus, one of Czechoslovakia’s pioneer civil aviation companies; he also was a World War II fighter instructor for the German Luftwaffe.

2010 – The aircraft used for flying scenes in the movie Con Air, a Fairchild C-123K Provider, crashes in Alaska’s Denali National Park while performing a cargo flight for All West Freight; the crew of three dies.