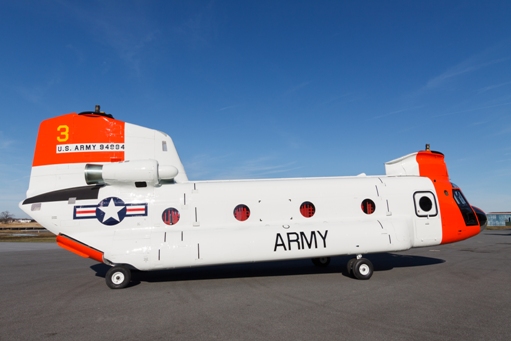 The oldest surviving Boeing CH-47A Chinook is being unveiled today just a year after it was delivered to a Delaware aviation company for restoration.

Summit Aviation, based in Middletown, Del., restored aircraft no. 59-94984 for the U.S. Army Transportation Museum at Fort Eustis, Va., where it will be displayed following a ceremony. Summit Aviation, a Greenwich AeroGroup company, has extensive experience in the assembly and modification of Chinooks.

It is the third Chinook manufactured by the Boeing Co. After delivery to the U.S. Army in the early 1960s, the heavy-lift helicopter served in its primary role of developmental flight testing and remained at Fort Eustis until its retirement nearly 40 years ago. The restoration project’s goal was to return the aircraft to as close a representation of a production aircraft as possible.

Before the restoration, Dave Hanselman, curator of the Army Transportation museum, said, “The aircraft is disintegrating before our eyes, and it’s an absolute shame to watch part of our heritage slip away.” Now, expressing his appreciation for the reborn Chinook, “I have an era-correct display that will aid in educating the public for years to come,” Hanselman said.

At Summit’s Delaware facility, workers removed and fabricated parts to replace items too corroded or damaged for use, including fuel tanks, instrument panels and engine nacelles. Maintenance personnel even restored the fuselage’s original mold line. Culminating the restoration, the Chinook received a paint scheme that replicates the one used by the U.S. Army Aviation Test and Evaluation Directorate in the 1960s. Its orange and white paint mark it as an aircraft specially modified for further development.

Twin-engined Chinooks primarily haul troops and equipment and have served in every U.S conflict from Vietnam to the present. One of the longest-produced military aircraft, more than 1,200 have been made. The Chinook has been particularly effective in Afghanistan’s mountainous, high-altitude terrain, where it serves a medevac role as well as transports troops and supplies to forward bases.

“It was an unequivocal privilege to participate in a program with such true and honorable intentions in preserving a piece of Army aviation history,” said Ralph Kunz, general manager of Summit Aviation. “We are proud to be able to perpetuate the enduring legacy of the CH47 Helicopter.”