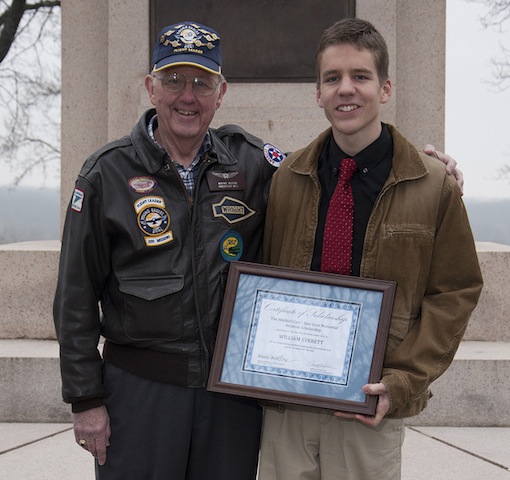 NAHA officials presented the scholarship certificate immediately after the annual First Flight Anniversary ceremony at the Wright Memorial on Wright-Patterson Air Force Base. Worth up to $1,500, the scholarship pays for ground or flight instruction for a student working toward a light sport or private pilot’s certificate.

The scholarship honors the memories of Mitchel Cary and Donald Gum, who were trustees and volunteer pilots for Wright “B” Flyer Inc., a NAHA partner. A retired Air Force colonel, Cary was a test pilot and a member of the Society of Experimental Test Pilots; Gum was a civilian Air Force engineer who learned to fly and built his own airplane.

Will takes lessons from Beaver Valley Aviation of Ohio at Greene County-Lewis A. Jackson Regional Airport in Xenia. The home-schooled youth says the flying bug bit him when he was six years old and took a ride in a vintage Piper Cub airplane. “From that time on I have loved anything to do with aviation,” he wrote in his application.

Several flights with volunteer pilots in the Experimental Aircraft Association’s Young Eagles program fed Will’s passion for flight. He began taking flying lessons at Greene County in July when he was still 15. He was aided by another scholarship named for the late Lewis A. Jackson, who was the Drector of Training for the legendary Tuskegee Airmen in World War II, educator and civilian aviation enthusiast.

Will also pays in sweat equity. Larry Sidle, owner of Beaver Valley Aviation, described Will as the quintessential airport kid who washes planes and works odd jobs in exchange for flying lessons.

Will said he has logged about 16 hours of flying time and has already made his first solo flight. “I love the beauty of being in the air and the way I feel when I am up in the plane. It is such a peaceful, contented and happy feeling,” he said, adding he hopes to make flying a career in some way that helps others, possibly in military aviation or as a missionary supply pilot.

NAHA plans to award the scholarship annually and expand it to more than one recipient as funding allows, said Tony Sculimbrene, executive director of the National Aviation Heritage Alliance, the management entity for NAHA. “We want to create an endowment so we can offer more scholarships in honor of Mitch and Don,” he said.