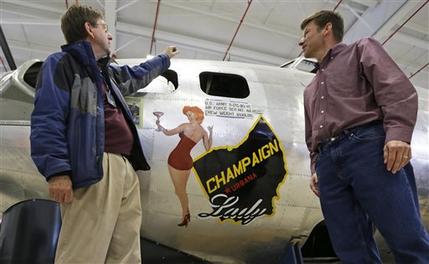 They got one part for the World War II-era bomber from under an elderly woman’s porch in the next town, and another was bought from someone who had it hanging in a bar in Colorado. One chunk was a prop in a 1960s TV show, and the tail section was salvaged from a wreck deep in the Alaska wilderness.

When dozens of volunteers are finished piecing them all together at a small Ohio museum, they’re going to roll out a better-than-new, airworthy version of one of history’s most famous military airplanes, the B-17, celebrated in Hollywood adventure movies like “Twelve O’Clock High” and “Memphis Belle.”

A behemoth of a vintage plane that hasn’t been manufactured new in nearly 70 years is being built one piece at time here – and when the volunteers can’t buy or barter for parts they need, they’re making them from scratch based on a collection of 28,000 original Boeing Co. blueprints fetched from microfiche at the Smithsonian Institution.

For the complete story by Mitch Stacy of The Associated Press, click here.