The Convair XC-99 was the largest piston-engined land-based transport aircraft ever built, and was developed from the Convair B-36 Peacemaker bomber, sharing the wings and some other structures with it. The first flight was on 24 November 1947 in San Diego, CA, and after testing it was delivered to the Air Force on 26 May 1949. The Convair Model 37 was a planned civil passenger variant based on the XC-99 but was not built. 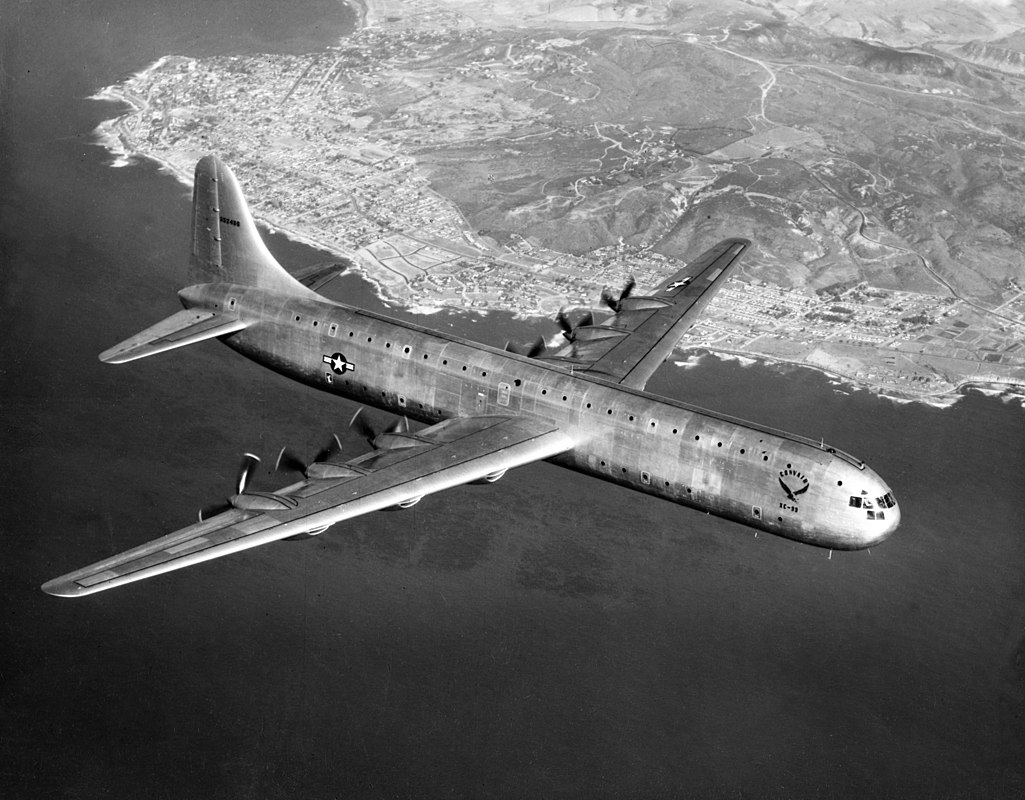 Design capacity of the XC-99 was 100,000 lb of cargo or 400 fully equipped soldiers on its double cargo decks. A cargo lift was installed for easier loading. The engines face rearward in a pusher configuration.

In July 1950, the XC-99 flew its first cargo mission, “Operation Elephant.” It transported 101,266 pounds of cargo, including engines and propellers for the B-36, from San Diego to Kelly Air Force Base in San Antonio, Texas, a record it would later break when it lifted 104,000 lb. from an airfield at 5,000 ft. elevation. In August 1953, the XC-99 would make its longest flight, 12,000 mi. to Rhein-Main Air Base, Germany, by way of Kindley Air Force Base, Bermuda and Lajes Field in the Azores. It carried more than 60,000 lb each way. It attracted much attention everywhere it flew.

The US Air Force determined that it had no need for such a large, long-range transport at that time, and no more were ordered. The sole XC-99 served until 1957, including much use during the Korean War. It made twice weekly trips from Kelly AFB to the aircraft depot at McClellan Air Force Base, California, transporting supplies and parts for the B-36 bomber while returning by way of other bases or depots making pick-ups and deliveries along the way. During its operational life, the XC-99 logged over 7,400 hours total time, and transported more than 60 million pounds of cargo. The aircraft made its last flight on 19 March 1957, landing at Kelly Air Force Base, where it would remain for the next 47 years. The then United States Air Force Museum at Wright-Patterson Air Force Base near Dayton, Ohio, requested that the aircraft be flown there for display, but the Air Force refused due to the $7,400 cost of the flight.