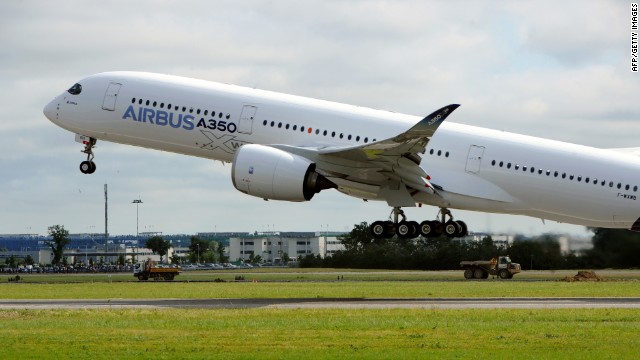 Watched by over 10,000 employees and spectators, the aircraft’s curled wingtips sliced into clouds above the Airbus factory in southwestern France and headed over the Pyrenees, with a crew of six wearing orange jumpsuits and parachutes.

The flight, with two former fighter pilots at the controls, was expected to last four hours and caps eight years of development estimated to have cost $15 billion.

“The airplane is behaving extremely well,” said British chief test pilot Peter Chandler, speaking by radio link from an altitude of 13,000 feet. Co-pilot Guy Magrin, a former French air force pilot, took the controls for the take-off at 10:01 local time, giving the plane air under its wings for the first time in front of a podium of airline chiefs who have ordered 613 aircraft.

For the complete story by Tim Hepher and Jean Décotte of Reuters, click here.

Photo by Airbus via CNN