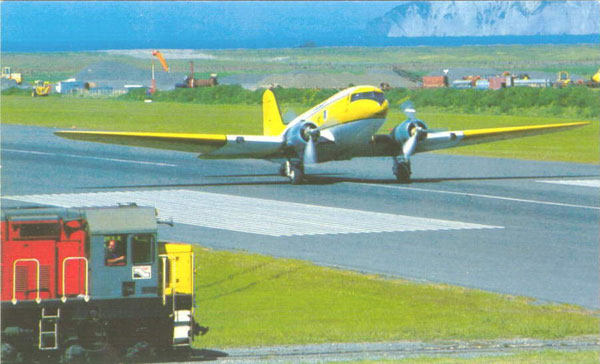 A sight seen nowhere else in the world: a New Zealand Rail freight train waits for a Fieldair DC-3 topdresser (crop duster) to clear the runway before proceeding across at Gisborne Airport on the east coast of New Zealand. This is believed to be the only place in the world where a main trunk railway line crosses an active runway.

Date of the photo is uncertain, but the aircraft pictured, believed to be ZK-BBJ piloted by Bruce Thompson, flew the last topdressing flight by a DC 3 out of Gisborne Airport in 1986, thereby marking the end of twin engine agricultural operations in New Zealand. The aircraft went on to fly freight across Cook Strait and was then used in Somalia in 1992 for the United Nations. It is believed to be abandoned there.