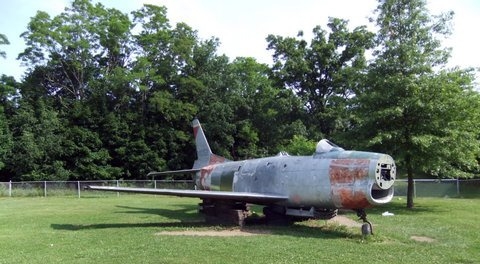 It is hard to believe that the North American F-86L Sabre that stands in Ford R. Dally Airplane Park in Monroe, N.Y., is 50 years old this year. Although some people may consider it nothing more than an old airplane, it is far more then that — it is a monument to the men who fought and died in the Korean War. From June 25, 1950, to July 25, 1953, the time period of the war, the Department of Defense database lists 54,246 Americans lost their lives fighting for freedom.

Airplane Park has stood as a symbol of Monroe for these 50 years, and has been recognized as part of Monroe just as people recognize the Statue of Liberty in New York Harbor. People who grew up in the area or visit Monroe often seem to have memories of the airplane in the park.

What better way, then, is there to remember Ford Dally and honor the veterans who served and died in the Korean War than to restore the plane and let it continue to be a centerpiece at the end of Crane Park?

For the complete story by The (Monroe-Woodbury, N.Y.) Photo News, click here.

Photo via The Photo News