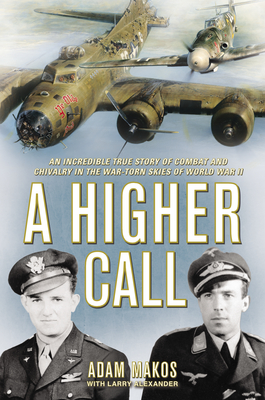 On Dec. 20, 1943, in the skies above war-torn Europe, two men – American B-17 bomber pilot Charlie Brown and veteran German fighter ace Franz Stigler – met in what became one of World War II’s most unusual encounters. The American’s bomber was severely damaged and his crewmen were wounded. The German’s fighter was poised to blast them from the sky. But something unusual happened – the German ace instead escorted the American plane to safety.

It’s a stellar example of heroism, valor, and honor that is so rarely seen today.  And for the first time, A Higher Call (Berkley Caliber) tells the complete story of the lives of the two men and what brought them to that life-changing encounter.  It even covers their reunion as elderly men.

Having interviewed countless U.S. veterans, author Adam Makos had heard his subjects talk about Charlie and Franz’s story like legend, with no one knowing what really happened. His curiosity piqued, Makos set out to discover the truth about that December day and to explore a fundamental question: Can good men fight a bad war and still keep their souls? This inspiring and compelling read examines the prudence of war and how we view and treat our enemies.

For more information on the book and to order it, click here. To see a video on the encounter, along with interviews of Brown and Stigler, click here.