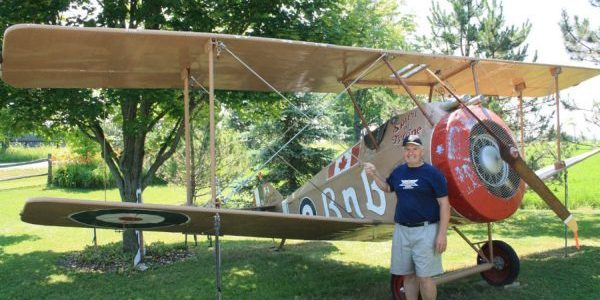 Almost every aviation enthusiast has built a few models of their favorite planes, but Canadian Ian Baron takes his modeling to a new level! So far, he has made four replicas of different types of planes used during world wars, all made from recycled bits and parts. Baron manages to create such huge replicas by measuring the parts of the planes of a [1:48] scale model plane.

The inspiration to make these replicas dawned upon Ian five years back when he visited Ford Automotive Museum in Michigan and he realized that there is a huge potential to go creative by learning the art of welding metal. Ian had already tried his hands on making dune buggies and had restored Model A Fords, and so making planes was a natural choice.

After collecting a lot of garbage from various households, Ian was all geared up to make planes except that he lacked metal sheets for making skin of the replicas. For that, Ian scavenged scrapyards, and auto and home depots and arranged enough metal sheets to make grand replicas.

This terrific video of Ian and his masterpieces will make your day.