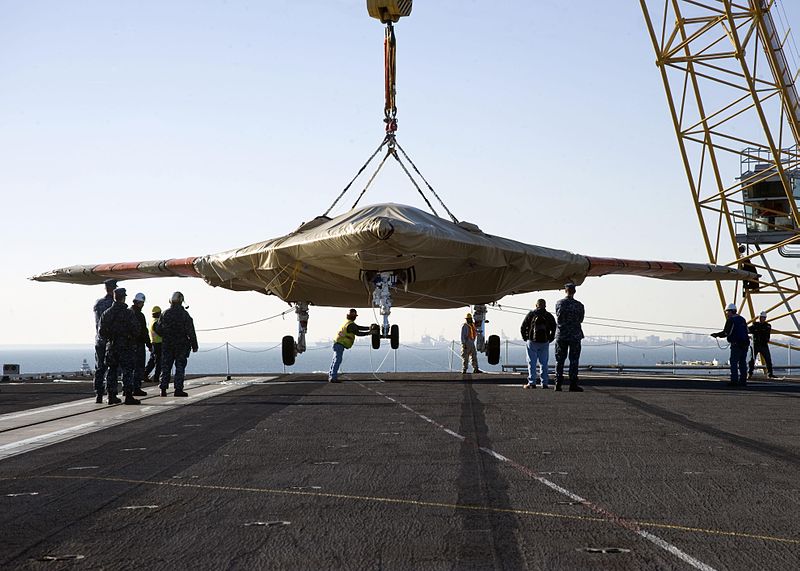 The U.S. Navy plans to make aviation history on Tuesday by catapulting an unmanned jet off an aircraft carrier for the first time, testing a long-range, stealthy, bat-winged plane that represents a jump forward in drone technology.

The Northrop Grumman X-47B, which can carry the equivalent of two precision-guided bombs and fly 2,000 nautical miles in one trip, is due to take off from the USS George H. W. Bush in the Atlantic using the same sling-shot system that sends manned aircraft aloft from the short runways aboard aircraft carriers. Because of its stealth potential and a range nearly twice that of the Lockheed Martin F-35 Joint Strike Fighter, the X-47B and its successors are seen as one potential answer to the threat posed by medium-range anti-ship missiles developed by potential rivals like China and Iran, defense analysts say.

The missiles and other so-called anti-access, area denial weapons would force U.S. aircraft carriers to operate far enough from shore that F-35 and F/A-18 aircraft would have to undergo refueling to carry out their missions, leaving them vulnerable to attack.

But an unmanned jet like the X-47B could give the Navy both a long-range strike and reconnaissance capability.

For the complete story by David Alexander of Reuters, click here.