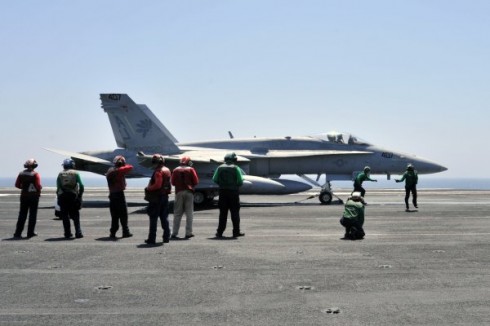 The commander on board the USS George H.W. Bush aircraft carrier overseeing the ongoing airstrikes in Iraq said Navy F/A-18s have flown at least 30 bombing missions against the Islamic State of Iraq and the Levant, or ISIL, targets.

The Navy’s Boeing F/A-18 Hornets are configured with a host of air-to-air and air-to-ground weapons such as the GBU-54 500-pound laser-guided bombs dropped in Iraq.  Laser-guided bombs can be guided by a laser-designation from the air or nearby ground forces. The GBU-54s dropped in Iraq are known as Laser Joint Direct Attack Munitions or LJDAMS, which rely on GPS guidance to pinpoint their targets.

For the complete story by Kris Osborn of DefenseTech.org, click here.