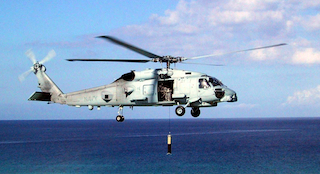 A Navy MH-60R Seahawk helicopter crash landed at North Island Naval Air Station late Wednesday night, putting all four crew members in the hospital. The helicopter, assigned to North Island’s HSM-75 Wolfpack squadron, was significantly damaged in what the Navy described as a “hard landing” on the tarmac. The aircraft remained on the landing area, sitting upright, on Thursday.

Despite early reports, no buildings were involved in the 11 p.m. incident as the Sikorsky helicopter was returning from a routine training mission, said Lt. Aaron Kakiel, spokesman for the Naval Air Forces command. Two of the crew were taken to UCSD Medical Center; the other two were taken to Scripps Mercy Hospital. They remained there Thursday afternoon in stable condition and were not expected to be released that day.

For the complete story by Jeanette Steele of the U-T San Diego, click here.