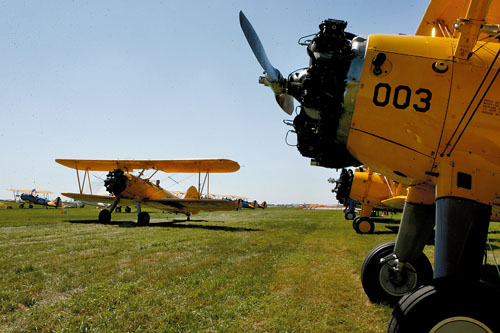 The Stearman Model 75, produced between 1935 and 1945 in Wichita, Kans., was not the only primary trainer flown by the U.S. Army Air Corps and the U.S. Navy in the World War II era. But the 8,428 biplanes that came from the Stearman factory became an aviation icon because more military pilots took their first leaps into the sky with it than in any other trainer ever built.

An estimated 2,000 Stearmans survive today and, while exact numbers aren’t known, as many as 1,500 may still be flying. Dozens of these survivors of the “Greatest Generation” days gather in Galesburg, Iowa, every year for the National Stearman Fly-In. This year’s event is planned for Sept. 2-7 at Galesburg Municipal Airport.

Another aviation icon will join the Stearmans this year — a restored Douglas Aircraft Co. DC-3. Its speed and range were much better than competitive airliners of the time, and the DC-3 revolutionized air transport in the 1930s and 1940s.

Photo by Bill Gaither, The Galesburg Register-Mail, via the National Stearman Fly-In