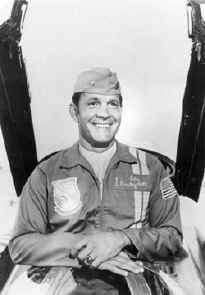 Forty years ago, U.S. Navy pilots Harley Hall and Ernie Christensen met briefly on the flight deck of the USS Enterprise. They reflected on what would be their final combat mission of the Vietnam War.

“I happen to be the last guy to talk to Harley on the deck, when we launched on the last day,” Christensen said a few days ago.

They were among the cream of America’s fighter pilots; Hall had commanded the Blue Angels flight team for two years. But they had never tested their skills against Soviet-built MiG jets. Christensen reminded his friend that Hall’s only kill was a “Buffalo Hunter,” an unmanned U.S. reconnaissance aircraft.

“We never got our MiGs, did we?” Christensen said in their brief conversation. “Harley said, ‘No, we never did.'”

A cease-fire had already been announced, making Jan. 27, 1973, the last day of combat operations.

“I said it’s hard to believe that this is it,” Christensen told Hall. “He looked at me and he was really mellow. He said, ‘Yeah, we’re done after today.’ He was really quiet.” That was the last day Christensen, now a retired rear admiral, saw Harley Hall alive.

For the complete story by Tom Vogt of The (Vancouver, Wash.) Columbian, click here.