It’s no secret that the P-51 Mustang and the Ford Mustang share a special bond; after all, the car was named after the airplane. The P-51 was arguably the most successful fighter aircraft of the Second World War, dominating in the European theater and making a large end of the war contribution in the Pacific. Meanwhile, the car has been the single most successful American muscle car and has remained in production since 1964. While it may merely be a name that links the iconic Mustangs, the importance of that name is not lost on many of those who have fallen in love with Ford’s iconic pony car.[1]

Ford originally began designing the Mustang in the early 1960s as an affordable and sporty muscle car.  Although some qualms do exist over the origins of the name, it is widely accepted that one of the car’s designers, John Najjar, greatly admired the P-51 and pushed to have the new car named in honor of the legendary fighter.  In the fifty plus years since the Ford Mustang hit the market it has been the best selling American muscle car, selling over 10 million models, and gaining a loyal following of fans and enthusiasts. Those who have fallen in love with the Ford Mustang have done so for countless reasons, be it the car’s sleek designs, horsepower, performance, or any other various reasons. Some, however, have combined their love for the car with the iconic World War II fighter it was named for by painting their cars in paint schemes reminiscent to the P-51.[2]

These special Ford Mustangs that bear resemblance to their military counterparts have an important and influential pieces of war memory. The paint schemes on these vehicles transcend them from being just a muscle car to being a monument to the most dominant fighter aircraft of the World War II. Many of the cars have been uniquely painted to represent a specific P-51 or a combination of P-51s bringing to life an important piece of historical technology with a modern twist that appeals to more than just historians and warbird enthusiasts. The true importance of the Ford P-51 Mustangs lies in how they reach across various groups of enthusiasts and link two iconic pieces of technology together.

It is hard, and maybe even impossible, to find the first Ford painted like a P-51. However, what is known is that this trend has been going on for some time now, and is growing in popularity.  It is also known that these paint jobs have been popping up on Ford Mustangs of almost every model year. Moreover, it isn’t just private car owners who have gotten in on this either. Ford, and performance companies, such as Roush, has also started to design and build P-51 themed cars.[3]

For the past 11 years Ford has built special tribute cars for the EAA Oshkosh Airventure airshow.  Airventure, a weeklong event, is arguably the premiere airshow in the United States that features aircraft from all eras of history. During the 2018 show, Ford unveiled a distinct Mustang painted in British Royal Air Force colors to commemorate the service the Eagle Squadrons.  From 1940 to 1942 244 American fighter pilots served in the Royal Air Force as part of these squadrons and helped defend the English Isle from German bombing raids. For the car that pays homage to these men, Ford used its GT model with a Ford performance supercharger kit and boasts 700hp, 5.0 Liter V-8 Engine. Roughly a month after the 2018 Airventure airshow ended the car was sold for $420,000, with the proceeds benefitting EAA.[4]

For the 2019 airshow, Ford partnered with the legendary performance company Roush, to pay tribute to one of the most well-known and successful Mustang pilots of World War II, Bud Anderson.  Anderson, a triple-ace, flew one the most distinct Mustang’s of the war, which he named Old Crow.  Although, Anderson flew multiple variants of the P-51, his preferred name stuck, and his planes always featured some sort of forest green paint scheme, and a red and yellow checkerboard pattern around the nose.  Anderson flew a total of 116 missions for the 363rd Fighter Squadron before returning to the U.S. in 1945.  Since the end of the World War II, and with the emergence of flying museums, Anderson’s Old Crow has been replicated several times by multiple different organizations.[5]

What makes the 2019 Ford/Roush Old Crow Mustang special is the relationship between Bud Anderson and Jack Roush, the founder of Roush Performance.  In 1993 Roush purchased a P-51D Mustang and over the course of 10 months turned it into Old Crow. Throughout the restoration process Roush invited Anderson to view the project and fly it once it was finished.  The airplane was even featured at the 1999 Oshkosh airshow.[6]

To pay tribute to Anderson through the car, Ford and Roush used a 2019 Mustang GT that features a cold air intake, exhaust X-airpipe and supercharger provided by Roush.  The car puts out 750hp and 610 pound-feet of torque.   The paint scheme on the car perfectly matches that of Anderson’s P-51, his name is decaled across the top of the vehicle. The Mustang has also been autographed by Jack Roush.[7]

While the 2019 Airventure Ford/Roush Old Crow Mustang is not the first car to pay a tribute to Bud Anderson, it is certainly a notable and important monument to one of WW II’s most important pilots and airplanes.  Moreover, as the trend of painting Ford Mustangs as P-51s continues to grow, and Ford continues to produce vehicles for each Airventure this unique form of war memory may continue to grow and commemorate even more iconic and legendary pilots and aircraft.-BY RYAN CLAUSER 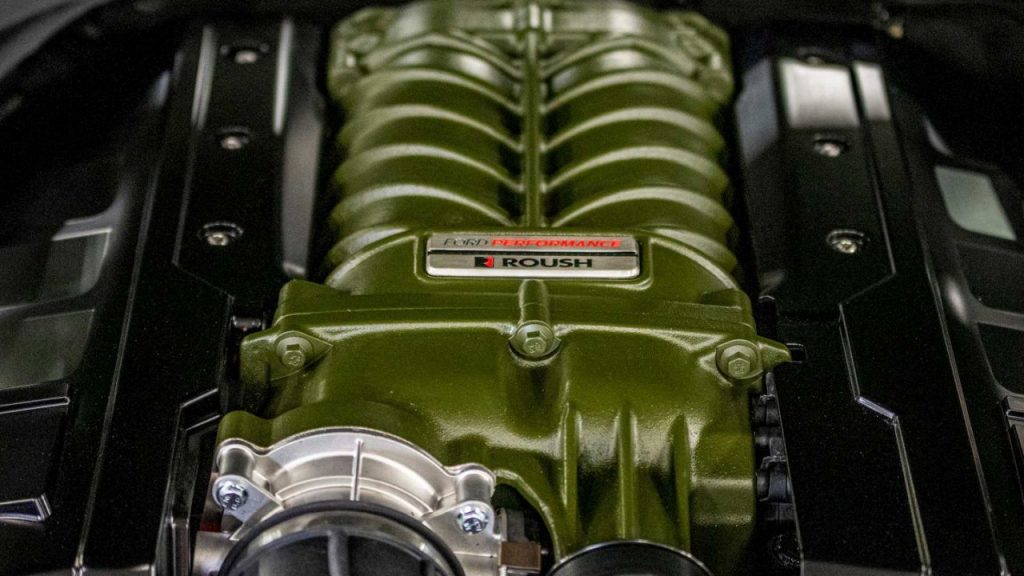