Thursday, May 10, 2019. The Flying Heritage & Combat Armor Museum (FHCAM) unveiled the paint scheme of its highly anticipated Me 262 project. The Me 262 was acquired by the museum back in 2000 and its restoration has been kept very quiet until now! FHCAM is excited to unveil, to you for the first time, its nearly complete Me 262.

This is an image of what FHCAM’s aircraft looked like when it was captured.  Like the museum’s Fw 190D, the plane had a gray undercoat overlain by two tones of green “seaweed-like” swirls.  This is an uncommon scheme.  Like many aircraft in service at the end of WWII, the plane had some bare metal engine cowls and others that appeared to be from a different aircraft. 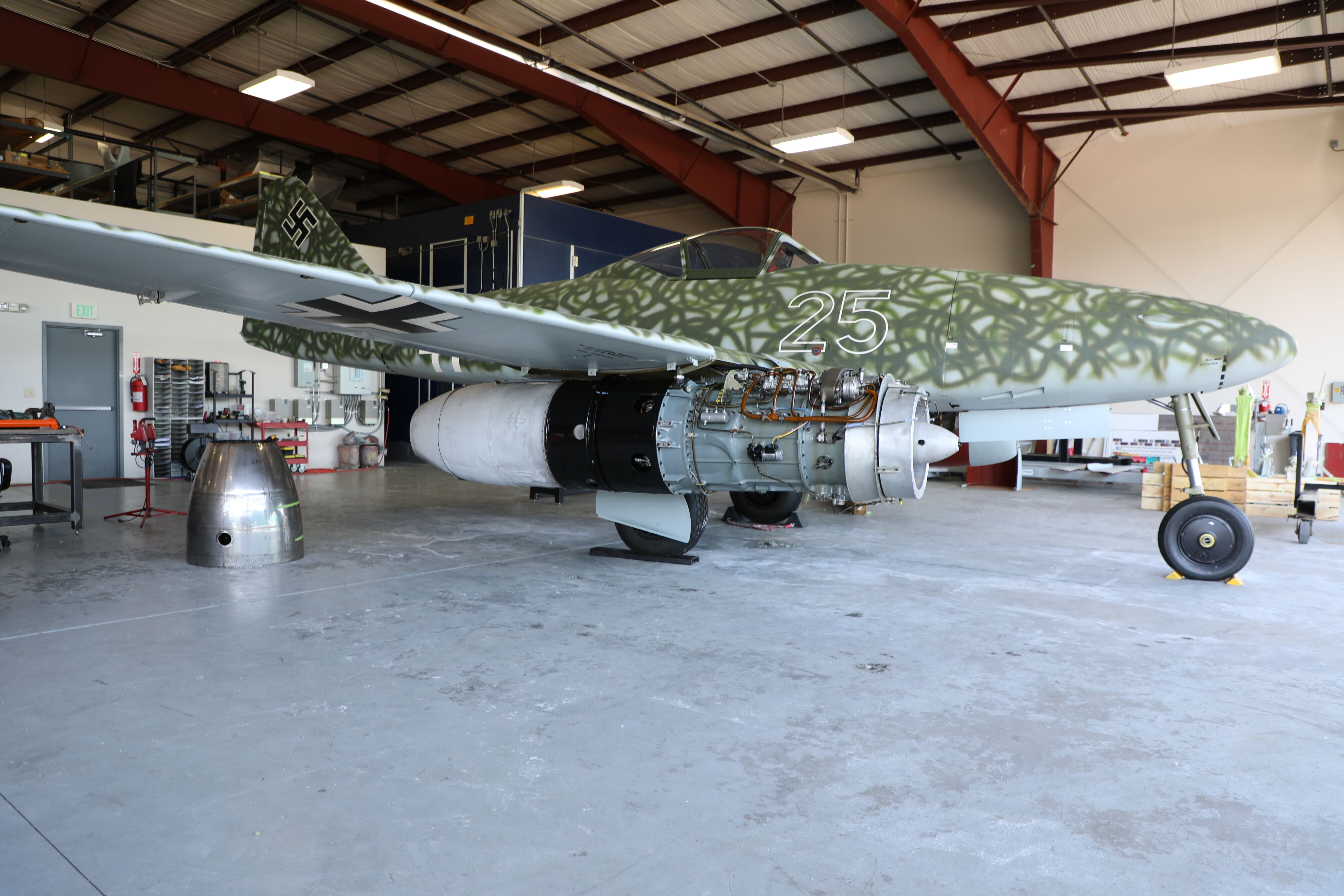 With restoration on this aircraft nearly complete the Flying Heritage is planning to complete the plane’s first taxi test by late July. Then the plane will be moved to Moses Lake where it will take its first flight later this year!

ABOUT FLYING HERITAGE & COMBAT ARMOR MUSEUM
The aircraft, vehicles and artifacts in the Flying Heritage & Combat Armor Museum are rare treasures of military technology — a testament to the era’s engineering skill and humanity’s spirit during the world conflicts of the 20th century. On rotation in our working hangar are military artifacts from the United States, Britain, Germany, Soviet Union and Japan restored with unparalleled authenticity to share with the public. FHCAM is a 501(c)(3) organization committed to educating people about these rare historic aircraft and artifacts.

ABOUT THE ME 262
FHCAM’s Me262 aircraft was built in the beginning of March, 1945 at Waldwerk Obertraubling factory near Regensburg.  Messerschmitt factory pilot Sergeant Otto Kaiser flew the aircraft for the first time on 14 March, 1945 from a flight test facility in Memmingen, Germany. After, the plane was transferred to Eger, where it was converted to an unarmed reconnaissance version of the Me 262.  The plane was found in A-1a/U3 configuration, meaning the fighter had different nose hardware than the standard fighter-type Me 262.  The 30mm guns were replaced with a pair of R6-50/30 vertical cameras in the nose compartment.  These planes were unarmed and relied on speed and altitude to avoid tangling with Allied fighters.

At the Lechfeld airfield, the plane came under the jurisdiction of the 54th Air Disarmament Squadron (ADS) of the U.S. Army in May of 1945.   The German crosses on the sides of the plane were painted over with a United States roundels and bars.  The swastika at the tail was also painted over.  These aircraft were acquired by the U.S. as part of Operation Lusty; a mission to gain access to enemy aircraft, technical and scientific reports, research facilities, and weapons.  On the 17th of May 1946 Colonel Watson flew the aircraft to Patterson Field for the start of this series of trials.  It was flown at Patterson and Wright Fields on test work for 4 hours and 40 minutes (8 flights), being flyable at Wright Field in August 1946. Flight trials were discontinued after four engine changes were required during the course of the tests, culminating in two single-engine landings. Around 1955, the plane (now in fairly rough shape) was acquired by Edward T. Maloney for his Planes of Fame Air Museum at Claremont, California.  (The museum later moved to Ontario, California and then Chino, California)  The plane stayed in the museum’s collection for many years, undergoing one or more restorations.  On display, the plane was marked in a “White Nine” color scheme copied from another aircraft, which was scrapped on a dump near Munich at the end of the war. In 2000, the Flying Heritage purchased the Me 262. Its airframe restoration was started in England and continued at several locations in the USA. All the work on the Jumo engines has been conducted by Aero Turbine in Stockton, California.  The final airframe assembly is taking place in Arlington, WA. The engine installs will be completed this week.