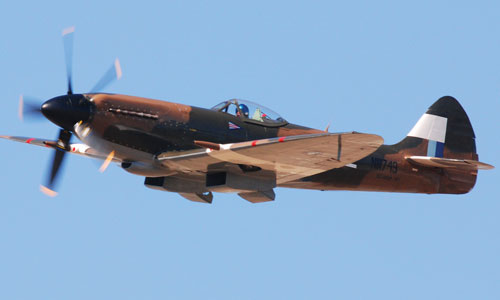 The Southern California Wing of the Commemorative Air Force is again able to display its Spitfire Mk.XIV at airshows and open house events. After being grounded for five years, the Spitfire returned to flight status on August 14, 2010, at Camarillo Airport in Southern California, the group’s home field and the location of their extensive aircraft collection, museum and restoration facilities. The Spitfire had been grounded for five years.
The Spitfire, s/n NH749, was acquired by the CAF in 2005 and shortly after arrival, experienced a coolant system failure. Pilot Steve Barber was able to save the aircraft and return it to the airfield safely.
There followed a six-year period of refurbishment, during which time the Rolls-Royce Griffon engine was removed and sent to Mike Nixon’s Vintage V-12 facility in Tehachapi, California, for a complete overhaul. All of the aircraft’s systems have been checked and repaired or replaced. Structural items, such as the undercarriage pintle pins, wing-attach fittings and engine bearers have been X-ray and dye-tested and replaced where necessary.
This was accomplished by an all-volunteer crew drawn from many walks of life. They were led by Les Bedding, who joined the RAF as a fitter in 1940, and he was assisted by his son Colin, Greg Bauman and his daughters Jessica and Jennifer, along with Dick Roberts, Dave Casey, Rob Seeger, Dave Spence, David Baker, Ken Gottshall and Alan Gaynor. Of great assistance and support was Craig Charleston, who originally restored the fighter in England in 1986. Others in the warbird restoration industry in England have been of immense help and we are forever grateful.
—Robert F. Dorr