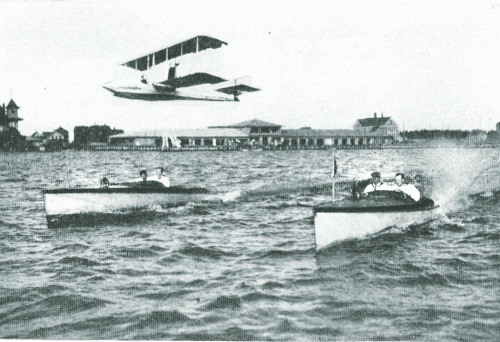 The husband-and wife team of Mark Marino and Sandra Ettestad doesn’t shy away from a lofty challenge. The Duluth couple is spearheading an effort to build from scratch a nearly authentic working replica of a 100-year-old airplane without the benefit of any surviving components or written plans.

Their only guideposts? A handful of photographs, some basic measurements, some written descriptions and what they could glean from studying other vaguely similar aircraft now on display in museums across the country.

The couple has assembled a small but able team of local craftsmen and aviation buffs committed to bringing back a piece of history by replicating one of the first marine aircraft in the nation — the Lark of Duluth. The original “flying boat” arrived in Duluth by train in June 1913, accompanied by a mechanic from its St. Louis-based builder, the Benoist Aircraft Co.

Greatly intrigued by flight, Julius Barnes, a wealthy grain trader, entrepreneur and philanthropist, paid $5,000 for the plane and named it in honor of his hometown. Adjusted for inflation, Barnes’ investment would equate to about $117,562 today.

For the complete story by Peter Passi of the Duluth News Tribune, click here.

Photo by the Minnesota Duluth Library via the Duluth News Tribune