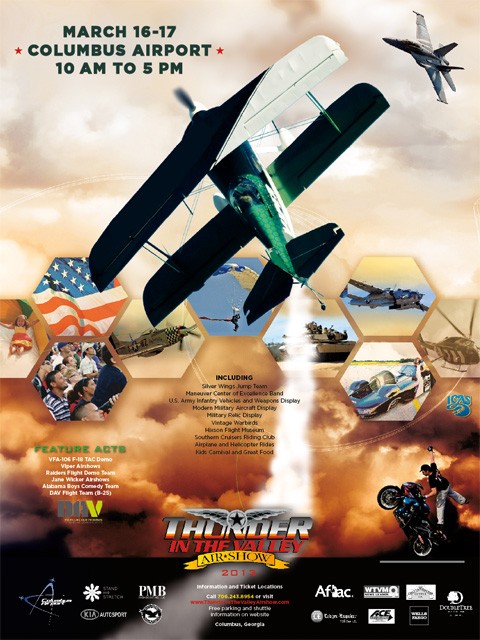 The mandatory budget cuts in Washington, D.C., known as the sequester is taking its toll on air shows including Georgia’s Thunder in the Valley Air Show as the armed forces have pulled out.

“All branches of the armed forces have informed us they cannot participate,” said Phaedra Childers, the show’s event coordinator, in a release issued Sunday. “The Air Force canceled as soon as budget cuts were a possibility; the Army had to pull its vehicles and weapons display last week; and the Navy called Friday to cancel the F-18 TAC Demo Team. We’ll have nothing from the military currently being used in training or on the front lines. We’re very disappointed.”

Despite the loss of military acts, more than three hours of mostly new-to-the-Valley performers remain. “Most of this year’s acts are new to our show or have not been here in years,” Childers said. “We’ll have historic aircraft and displays from World War II, Korea, and Vietnam; and the Army’s incredible Silver Wings Parachute Team will still open the show both days. In all, there will still be nearly 200 minutes of performances.”

There will be flying demonstrations by historic military aircraft, airplane and helicopter rides, a children’s carnival, a 20-foot replica of the Vietnam Veterans’ Memorial, great food, and much more.