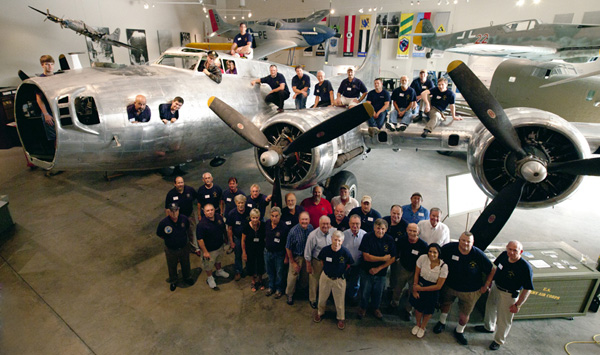 After more than six years of painstaking restoration work, “City of Savannah,” a Boeing B-17G Flying Fortress owned by the National Museum of the Mighty Eighth Air Force, will be dedicated on Wednesday.

The achievement was accomplished by museum volunteers following the bomber’s acquisition from the Smithsonian’s National Air & Space Museum in 2009. The January 28th dedication is no coincidence, as it also marks the 73rd anniversary for the activation of the Eighth Air Force during WWII in Savannah, Ga.

Tomorrow’s event will include an official dedication program, with various speakers and military dignitaries, including U.S. Air Force Major Gen. Scott A. Vander Hamm, the current Eighth Air Force commander. Along with honoring the many people who made the restoration possible, World War II veterans will be recognized as well, including many who served with B-17s. Family members of the crewmen who served in the original “City of Savannah” are also expected to attend. A light reception will follow the dedication service.

“City of Savannah” has a long history, being named after a brave crew and the city in which the Mighty Eighth Air Force originated. The restoration has involved more than 60,000 hours of labor from a team of over 140 volunteers.  The museum’s volunteers have worked together with other volunteers, interns, engineers, designers and instructors representing corporations and schools such as Gulfstream Aerospace, Chroma Corp., LMI, Savannah Tech and others. The aircraft, when completed, will be in its original combat configuration with radios and gun turrets in working order and available for demonstration. The museum is justifiably proud of their achievement and is thankful for the countless hours, teamwork and expertise offered by the many people who contributed to this restoration.

Henry Skipper, the museum’s president and CEO, predicts that its B-17 will be a huge draw and stand as one of the best examples of restored WWII-era aircraft in the world.

“City of Savannah is being dedicated as a symbol of the immeasurable contribution and sacrifice of the men of the 8th Air Force in WWII,” he said. “The project is a great example of teamwork between the many volunteers and the museum staff to get this job done, and done at the highest level.  People from all over the world will have the opportunity to view this iconic airplane and learn the history of the 8th Air Force by visiting this great museum.”

Story and photo by MightyEighth.org