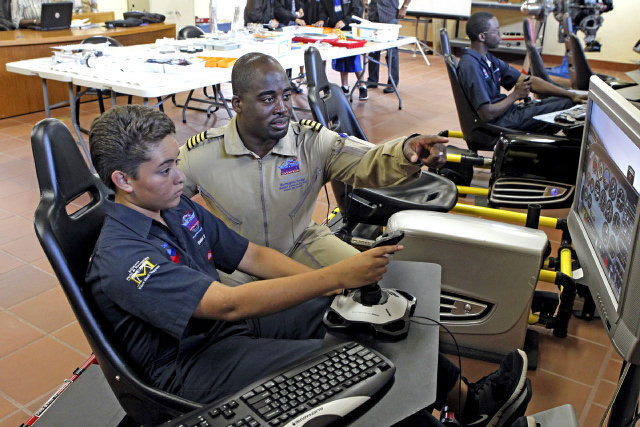 Barrington Irving flew around the world in a plane he built himself four years ago, becoming the first black pilot and youngest person to ever make the trip. Now he’s a teacher.

As a young man at Miami Northwestern Senior High School, Barrington Irving knew he had potential. He imagined a football scholarship to a state school would fulfill that potential. When the Opa-locka native was offered a full ride to the University of Florida, he was set.

But another dream took off. Before turning 29 years old, Irving became the youngest person and the first black pilot to fly around the world, the founder of a non-profit organization and most recently, one of 15 National Geographic Emerging Explorers in 2012. The award recognizes pioneers in emerging fields, and sponsors them on their newest adventures. Irving, who has dedicated his time to educating young people about engineering and aviation, is going to use the benefits of the title to create the world’s first virtual flying classroom.

His journey began in Miami, long before he took off on his first flight.

Irving was sixteen and working at his parents’ bookstore in Miami Gardens when he met Gary Robinson, a customer and a commercial pilot. Robinson told Irving about the life of a pilot. Although the salary was intriguing, Irving didn’t feel he was smart enough.

“I never had that confidence,” Irving said.

But his confidence soared when Robinson invited Irving to take a test flight with him in a training plane from the Opa-locka airport. Flying above his own neighborhood, from the airport he lived so close to, Irving became enamored with aviation. Robinson gave Irving a handheld radio that could tune into airport traffic control, helping Irving tune into his own calling. Upon graduating, Irving rejected the UF football scholarship and started working odd jobs. He cleaned pools. He bagged groceries. But he dreamed of the skies. While he saved up, Irving started studying aeronautical science at Florida Memorial University in Miami Gardens.

With the help of his mentor, Irving started learning how to fly planes, first with simulator software, which he now uses with students grades 3 through 12 in his after-school and summer camp program, Experience Aviation. The non-profit educational program is based at Opa-locka Airport and for the first time this year, the newly restored Glen Curtiss Mansion in Miami Springs. Through the program, which he started in 2008, he has mentored hundreds of students in the South Florida area. Because of Irving’s success in aviation, he decided to give back by encouraging young people to pursue careers in science, technology, engineering and mathematics.

“My ultimate goal is to show young people that they can do amazing things,” said Irving.

It’s something that Irving showed the world when he flew around the world in a plane put together from over $300,000 worth of donated parts. Irving reached out to aviation companies, telling them about his passion for flying and aerospace engineering. The companies saw the young man’s effort as remarkable. The airplane, a Cessna 400, is named the “Inspiration,” and was manufactured and assembled by the Columbia Aircraft Mfg. Co. in 2005. Without a de-icing system or weather radar, the 23-year-old pilot took off from Miami making the unprecedented journey around the globe.

Upon landing, Irving felt the accomplishment would not be complete without teaching minority youth that they could do the same. Under his guidance, 60 high school students built a plane in 10 weeks– from scratch. Then, Barrington tested it out with a flight over Miami. The program evolved into Experience Aviation, which starts June 18th this year. There are some students in the program that are coming straight from jail, and some that are straight-A students. But according to Irving, you wouldn’t be able to tell the difference when they’re learning how to fly on a simulator, or building an engine.

As an educator, Irving is exploring the uncharted territory of this generation of students’ future in science and math. With test scores affecting school budgets in low-income neighborhoods, Irving wants to break the cycle by providing a place for students to learn and get practical experience in engineering. This year, returning alumni will build a laser tag arena at one of the airport hangars at Opa-locka airport, which will be open to the community.

Irving and his long-time friend Rajeev Brown run the two programs. Brown works with different corporations like Carnival Cruise Ships and the National Business Aviation Association to fund scholarships for students who can’t afford to pay for the program. The extra effort is worth it to Irving, who made a promise to his mentor to give back before he even took off.

“No matter rich or poor, kids are bored in school,” Irving said. “That needs to change.”

The type of school Irving is planning is everything but boring.

Irving wants to make his second flight around the world. This time, he would be streaming live lessons from the cockpit, 34,000 feet above the classrooms where students would be watching his adventures. He also plans to land on all seven continents, for 50 expeditions, to teach students through interaction with different cultures on virtually every point on the map.

Now that National Geographic has named Irving an Emerging Explorer, that adventure is well under way.

Calls and blogging from the plane will allow students to participate in the adventure, choosing locations and situations for Irving. National Geographic and NASA will be supporting Irving on the flight, as well as covering the 50 stops he will make during the trip, scheduled to start in October 2013. Along with this project, National Geographic will sponsor Irving for the next five years on expeditions around the world.

Among the wonders he will see are Machu Picchu, the Galápagos Islands, the Pyramids, the Serengeti Plains, the Roman Coliseum, the Taj Mahal, and the Great Wall of China. Technology on the plane will share data about the surroundings to students while Irving experiences it firsthand. With this inter-continental flight, Irving will continue to make a connection with young people, using technology in a changing world to make a difference. Raising four kids and running a non-profit in Miami, the Jamaican-born pilot is a grounded family man; even at 45,000 feet, he’s found a way to connect with his roots.

The emergence of young explorers at the new site in Miami Springs has special significance, since the facility was the home of the father of aviation, Glen Curtiss. The architect, engineer, and first commercial pilot, Curtiss created more than 500 patented inventions in the garage of his pueblo-style home. He built the estate in 1925, and after it burned down three times, it seemed to be a forgotten piece of flying history. Then, 13 years ago, the old blueprints were found during a restoration project. After reconstructing the ruined areas of the mansion, the group offered the space to Experience Aviation. The rest of the house will become a museum.

Curtiss, who made several secret corridors and office spaces to avoid social interactions, hardly seems like an influence on Irving. But so far, the space has been an inspiration for him and his students.

Daniel Diaz, 14, an incoming ninth-grader at Coral Park Senior High, has participated in Experience Aviation for three years. While he had never seen aviation as a field before, he has his mind set on being an aeronautical engineer.

“I have a chance to do things that a lot of people my age don’t have,” said Diaz, who flew with Irving in a small plane last year, sealing his love for flying. “I never thought I could feel what it’s like to be in the sky. Now that’s all I want to do.”