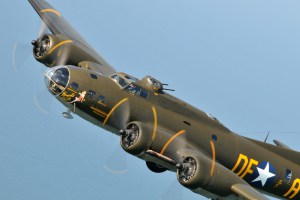 The four-engine bomber bristling with machine guns brings to mind the anxiety of the men who ran Hitler’s gauntlet in the skies over Europe in the bleak days of World War II.

The Boeing B-17 Flying Fortress was a mass-produced piece of American military history, but only a handful remain. One is right here in Jacksonville, Fla. — for a few days. The plane from the iconic movie “Memphis Belle” is in town courtesy of the Liberty Foundation, a nonprofit organization devoted to keeping the B-17s restored and in the sky to honor the veterans who flew them.

“The more anyone learns about that war and the tremendous sacrifice our veterans made to win that war, the more you want to honor that sacrifice,” the group’s founder, Ed Brooks, said. And sacrifice they did.

For the complete story by Clifford Davis of Jacksonville.com, click here.

Photo by the Liberty Foundation