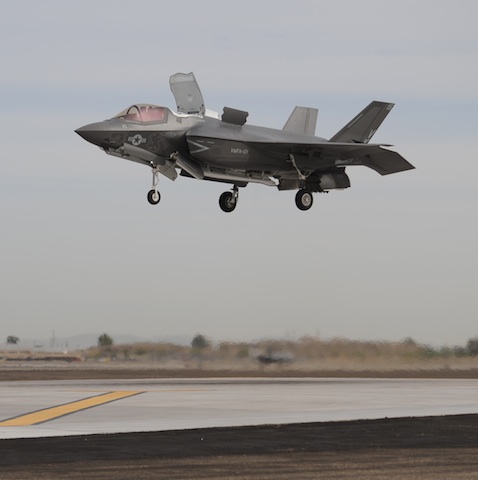 “The first STOVL flight for an F-35B outside of the test environment was another milestone achieved by the Marine Corps and the Green Knights today here at MCAS Yuma,” Scott said. “The F-35 program and specifically the F-35B have made significant progress to make this possible.”

As the squadron expands its operations and end strength, they will continue revolutionizing expeditionary Marine air-ground combat power in all threat environments through the use of MCAS Yuma training ranges in Arizona and California. VMFA-121 will be home to about 300 Marines and is expected to receive additional F-35s throughout the next 8 to 12 months, with a total of 16 aircraft scheduled to arrive by late 2013.

Specific to the Corps, consolidating three aircraft — the AV-8B Harrier and the F/A-18 Hornet, both built by McDonnell Douglas, as well as the Northrop Grumman EA-6B Prowler — into one is central to maintaining tactical aviation affordability and serving as good stewards of taxpayer dollars.

VMFA-121 will continue to set the pace for the F-35 program based on a common platform. The U.S. Air Force and Navy can now integrate best practices from VMFA-121 in preparation for the future operational basing of the F-35A and F-35C.