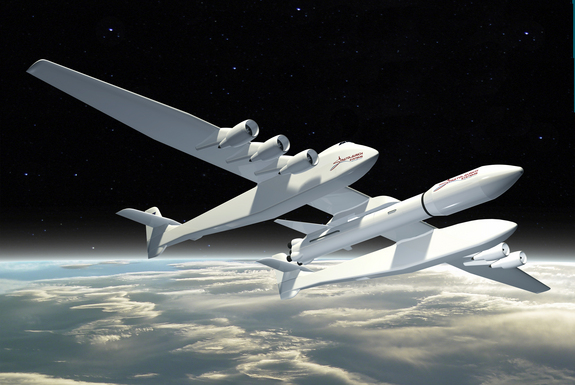 Microsoft billionaire Paul Allen’s dream to build the world’s largest airplane based on the remains of two used Boeing 747s is 40 percent complete.

Scaled Composites President Kevin Mickey confirmed the progress in an email Tuesday from that company’s headquarters in Mojave, Calif., where the aircraft is being built. The aircraft is the centerpiece of Allen’s Stratolaunch Systems company, which is intended to reduce the cost of space launches by carrying a launch vehicle 30,000 feet in the air slung under the mammoth plane, then igniting the rocket motors.

Scaled Composites is building the Stratolaunch for Allen by harnessing six former 747 engines for power, and matching them to a twin-hull composite aircraft, with a wingspan of 380 feet.

For the complete story by Steve Wilhelm of the Puget Sound Business Journal, click here.