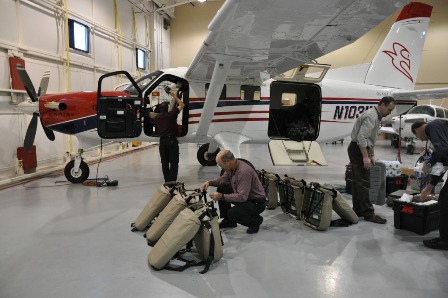 The deployment marks the first-ever use of this specially designed airplane in disaster relief work.

Following a brief dedication ceremony yesterday afternoon, the Kodiak took off on its 3,000-mile, 18-hour flight to Haiti.

The Kodiak, which can carry more cargo and passengers than the Cessna planes currently in use in Haiti, will support the MAF relief efforts. The Kodiak runs on jet fuel, which is more readily available than costly aviation gasoline, or ìavgas,î which fuels Cessnas and is in short supply in Haiti.

ìThe Kodiak is the next-generation bush plane and is made for such a time as this,î said John Boyd, president of MAF. ìIt can land on short, unpaved airstrips to get essential humanitarian help to its destination quickly and safely in the absence of viable roads. The Kodiak will greatly expand our ability to quickly take aid where it is most needed.î

This deployment of its finest aircraft is the latest MAF response to the tragedy that has claimed some 200,000 lives and damaged most of the buildings in the capital city of Port-au-Prince.

Disaster response has been an MAF area of expertise for more than 60 years. In past disasters, including the Indonesian Tsunami of 2004, Hurricane Felix and Cyclone Sidr in 2007, and the Haitian hurricanes of 2008, MAF provided communications systems, delivered relief supplies, transported medical teams and assisted humanitarian organizations in reaching people and areas that had been otherwise cut off from assistance.

MAF flights bring desperately needed relief supplies to outlying towns and return to Port-au-Prince with expatriates who had been working in Haiti before the earthquake and are evacuating the country.

MAF, which has been serving in Haiti for 23 years, has set up a Port-au-Prince communications center connected to a GATR VSAT satellite system, supplying direly needed high-bandwidth communications to workers from at least 16 international aid groups. The ministry is also helping coordinate the arrival and distribution of relief through its hangar at the airport. This service is valuable to relief organization as MAF staff know the country, the culture and the language.

ìWith the help of MAF, CCH’s trauma team and medical supplies are in Jacmel helping heal the injured, hurt and hopeless,î said Karen H. Carr, director of Community Coalition for Haiti. ìMAF has been a constant source of hope for all of the relief organizations trying to get supplies and medical personnel into Haiti. For the Haitians who are suffering and those bringing help, hearing the MAF flights overhead gives us more reason to believe that things will recover here and that more help is on the way.

ìWithout MAF, our ministry here to those in need in Jesus’ name would not be possible,î Carr said. ìFor the lives that have been saved, we owe MAF an eternal debt of gratitude. For those who will hear and see Jesus touching them through our medical volunteers and MAF’s efforts, our appreciation on their behalf is infinite.î

The cargo aboard the Kodiak included two boxes of aid collected by 9-year-old Moise Salois of Nampa, Idaho. Young Moise, adopted from an orphanage in Haiti four years ago, still has two brothers and a grandmother living in Haiti. Among items Moise sent to Haiti on the MAF flight were medical supplies, infant formula, food and clothing.

Additionally, MAF is partnering with Hands of Hope and World Concern to provide relief supplies to Haiti. Among items collected for distribution in Haiti are food such as Power Bars, peanut butter and cooking oil; medical supplies including surgical gloves and orthopedic braces and splints; and other supplies such as blankets, solar-powered flashlights, large tarps, nylon rope and bungee cords.

This aircraft is the fourth MAF Kodiak. Three others are already serving overseas in remote areas.

The Kodiak is manufactured by Quest Aircraft Co. of Sandpoint, Idaho, which was founded to provide rugged, backcountry aircraft for remote operations for mission aviation organizations around the world.

Over the next few years, MAF will place 18 Kodiaks into service, replacing many of its Cessna 206s. Because this revolutionary aircraft can carry nearly twice the cargo of the Cessna 206, which makes up most of MAFís fleet, the amount of medicine, food and disaster relief supplies MAF delivers at half the cost per cargo pound.

(Above): Members of the MAF team ready the new Kodiak for itís 18-hour, 3,000 mile flight to Haiti. The Kodiak will join three other MAF planes already participating in the disaster relief effort there.