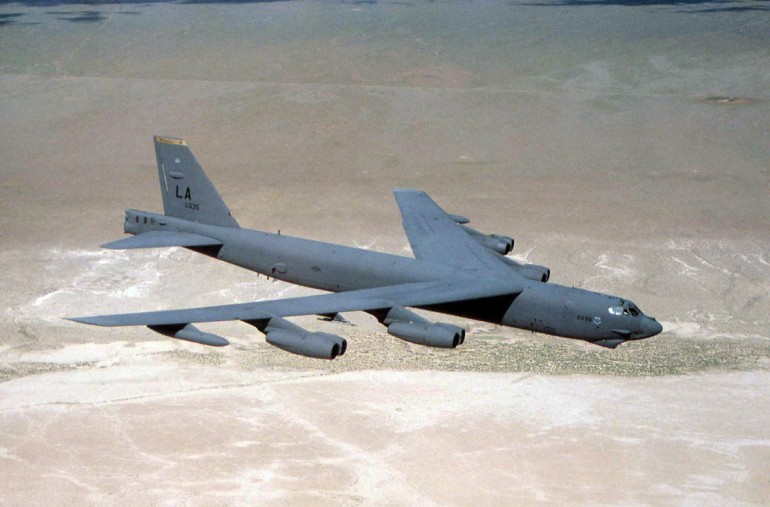 Aviators, maintainers and Boeing B-52H Stratofortress aircraft from Louisiana’s Barksdale Air Force Base went to Andersen AFB, Guam, this week to demonstrate the United States’ continued commitment to stability and security in the Asia-Pacific region.

Global Strike Command’s deployment of bombers to Andersen not only showcases the command’s ability to conduct its mission, but also exemplifies commitment to providing global vigilance, reach and power. “Our main mission is to deter and assure,” said Capt. Michael Lopez, 20th Bomb Squadron pilot. “We are there to provide support to our allies in the region and to provide combat capability, if needed, for the Pacific Air Forces and Pacific Command.”

Movement of U.S. Air Force bombers into the Western Pacific has been ongoing since March 2004, as the U.S. Pacific Command regularly adjusts its force posture to maintain a prudent deterrent capability within the region.

“As we know, the United States has done a strategic pivot toward the Pacific,” said Lt. Col. Scott Maytan, 20th BS commander. “Strategic continuous bomber presence is part of that. It is a way for B-52s to augment military forces that we have in the theater.”

The continuous bomber presence showcases the 2nd Bomb Wing’s ability to operate aircraft within the Pacific and support exercises, operations, and contingencies as required.

“We own 50 percent of the responsibility for this, it is shared across the B-52 community, so that’s a big piece for the 2nd BW to support,” Maytan said. “It’s a full spectrum effort — we’ve got aircrew, airplanes, maintenance support and other operations support personnel that go out to make sure we are able to do the mission just like we would do it with the resources we have here at home.”

The Air Force’s nuclear and conventional precision strike forces can credibly threaten and effectively conduct global strike by holding any target at risk and if necessary, disabling or destroying it promptly — the key to the branch’s overall mission of global vigilance, reach and power.

“What we do day to day with this presence mission is show our ability to fly our airplanes around the Pacific theater and support whatever contingencies we might be asked to do,” Maytan said. “The continuous bomber presence maintains long-range strike capability in theater, so our national decision makers have assets that they can use should they ever need to.”

CBP also allows bombers the opportunity to integrate into joint and coalition training exercises in the Pacific.

“We are going to go out there and continuously sharpen our skills,” Lopez said. “We will have local training missions to continue training on all of our different combat capabilities. In addition, we will also be out there working with our partners training with them in different exercises throughout the region.”

Aircrews also plan to take advantage of being in close proximity to other U.S. services, along with the opportunity to work on aviation and combat concepts.

“It is a great opportunity for us when we go out there and work with all different players in the region,” Lopez said. “Going out there we get to integrate with them to assure the Pacific.”

Though they have been to Guam numerous times, Lopez says every time is a little different than the last, and they never lose the enthusiasm. “We are excited to go out there to provide this force capability from here…to the Pacific,” he said. “We are there to provide the security that is needed; and if called upon, use the firepower we provide to the nation.”