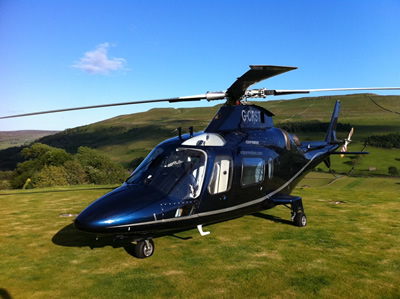 A helicopter crashed into a crane and fell on a crowded street in central London during rush hour on Wednesday, sending flames and black plumes of smoke into the air. The pilot and one person on the ground were killed and 13 others injured, officials said.

The helicopter, an Augusta A109E flown by Surrey-based charter firm RotorMotion (shown above), crashed in misty weather just south of the River Thames near the Underground and mainline train station at Vauxhall, and close to the headquarters of spy agency MI6.

Police said one person had critical injuries. Six were taken to a nearby hospital with “minor injuries” and seven treated at the scene, London Ambulance Service said. “It was something of a miracle that this was not many, many times worse,” said police Cmdr. Neil Basu.

The pilot, who was killed, had requested to divert and land at the nearby London Heliport due to bad weather, the heliport said in a statement.

For the complete story by Cassandra Vinograd of The Associated Press, click here.