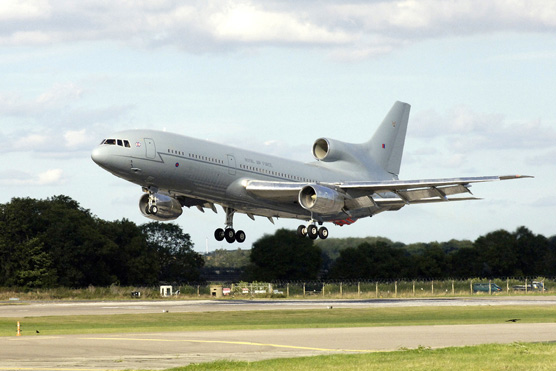 Story and photo by the Royal Air Force

The Lockheed TriStar has flown its last operational mission with the Royal Air Force bringing to an end 30 years of service which saw the aircraft at the heart of operations around the world. On Monday, two TriStars of 216 Squadron based at RAF Brize Norton flew an air-to-air refueling mission over the North Sea before one conducted flypasts at airfields associated with its history.

During its service the TriStar, fondly known as “Timmy” by its crews, has formed the backbone of long range air transport and air-to-air refueling, participating in nearly every British conflict since it was brought into service. The fleet of nine aircraft were acquired as a direct result of the Falklands conflict and the need to provide support to forces in the South Atlantic and to bolster the air-to-air refueling fleet.

In more recent times TriStars, have provided air-to-air refueling to fast jet aircraft operating over Afghanistan and Libya and provided the vital air bridge, transporting troops and cargo to Iraq and Afghanistan. Over a period of eight years, 216 Squadron flew 1,642 times to Afghanistan, carrying a quarter of a million passengers each way and traveling a total distance equivalent to flying around the world 640 times.

“TriStar has served the RAF for 30 years and today is an opportunity to celebrate its long and distinguished career. Providing vital support, TriStar has carried over 250,000 troops as well as battle-winning supplies to our personnel wherever they are in the world. It also carried out vital air-to-air refueling to our frontline combat aircraft at home and on deployed operations,” said Philip Dunne, minister for defense equipment, support and technology.

“Its replacement, Voyager, is testament to our commitment to provide state of the art transport and refuelling capability for our Armed Forces. Capable of carrying more, for longer, it has already begun flights to Afghanistan and will also refuel our frontline combat aircraft for decades to come.”

Speaking on the last operational mission of the TriStar, Wing Commander Peter Morgan, commander of 216 Squadron, said, “For us this is a very sad occasion. We’ve been very proud of the TriStar over the past 30 years where it’s been involved in nearly every operation in both the air transport and air-to-air refueling roles.Pretty much everyone in the military has been in a TriStar and after 30 years all the aircraft are still in service, it has an impeccable safety record and is working to the very end of its career.”

The TriStar’s duties have been taken over by the Airbus A330 MRTT Voyager, which now provides state-of-the-art air-to-air refueling in support of the Quick Reaction Force that protects the UK and Falkland Island airspace 365 days a year.

The remaining four TriStar aircraft were slated to leave RAF Brize Norton for the final time yesterday to Bruntingthorpe Airfield, Leicestershire, for disposal.