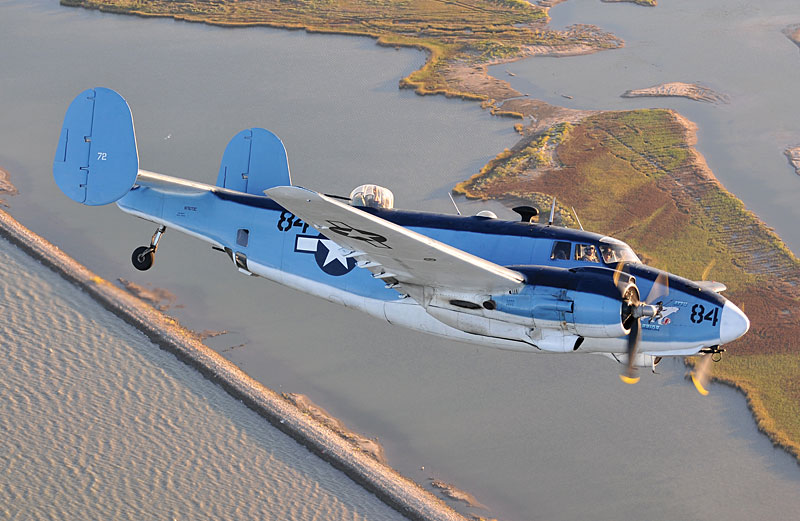 The Little Known Warrior
The Lockheed PV-2 Harpoon was probably one of the least known bombers of the Second World War, but it is certainly not the least important. In fact, its work as a reconnaissance and patrol aircraft conducted principally in the Pacific Theatre and the difficult sector of the Aleutian Islands, was vital to the U.S. The Harpoon evolved from the Lockheed Hudson that had flown with the RAF. That success led Lockheed to propose a military version of the larger Lockheed 18 Lodestar, and total of 675 of these aircraft was contracted for the RAF, which named the type the Ventura. Although its performance was quite good, the Ventura was found to be unsuited to daylight bombing operations and was transferred to Coastal Command.

During 1943, Lockheed produced a new version of the Navy PV-1 Ventura, designated PV-2 Harpoon, which was a major redesign with increased wing area and expanded load-carrying capability. The new version made its maiden flight on December 3, 1943 and, like its predecessors, the PV-2 Harpoon was built by Lockheed’s Vega subsidiary. The motivation for redesign was to correct the weaknesses in the PV-1, which demonstrated poor takeoff performance at full fuel load.

On the PV-2, the armament became standardized at five forward-firing machine guns. Many early PV-1s had a bombardier’s position, which was deleted in the PV-2. Some other significant developments included the increase of the bomb load by 30% to 4,000 lb, and the ability to carry eight 5-inch (127 mm) HVAR rockets under the wings. While the PV-2 was expected to have increased range and better takeoff, the anticipated speed was expected to be lower than the PV-1, due to the use of the same Pratt & Whitney R-2800 engines and an increase in weight. The Navy ordered 500 examples.

Early tests indicated a tendency for the wings to wrinkle dangerously. As the problem could not be solved by a 6 foot reduction in wingspan (making the wing uniformly flexible), a complete redesign of the wing was required. This hurdle delayed entry of the PV-2 into service. Those PV-2s already delivered were used for training purposes under the designation PV-2C. By the end of 1944, only 69 PV-2s had been delivered. They finally resumed when the redesign was complete. The PV-2 was taken into combat for the first time in March of 1945 by VP-139, one of the original PV—1 squadrons.  The combat use of the Harpoon by the Navy was fairly brief, and was cut short by the end of the war in August.

Today in the U.S. at least three Harpoons are flying, including the one operated by Dave Hansen of the Warbird Warriors Foundation. He had found the aircraft semi-abandoned on a ramp in Wyoming. It took a year to get it in ferryable condition and to its new home in Heber City, Utah. There, Hansen, with a group of friends and volunteers, began the restoration to return it to the exact condition, internally and externally, of an aircraft that flew during the war in the remote Alaskan theatre. Many parts were missing, mainly because in its latter years it had been used to spray insecticide. In particular, much work was required to restore and install the dorsal turret and the inside of the aircraft.

On May 23, 2009, after two years and thousands of hours of work, the restoration team achieved its goal of returning the aircraft to the air. Thanks to the talent of Dave Mueller, a local artist, it was decided to apply the “Attu Warrior” nose art, with which Hansen is trying to represent all the aircraft that flew in the remote and almost forgotten theater in the Aleutian Islands. Specifically, the Harpoon honors VPB-139 whose task was to fly strikes at the northern end of the Japanese Empire, in the Kurile Islands, and made searches and photographic runs over the area.

Today Attu Warrior is based at Heber City, Utah, the home of the Warbird Warriors Foundation.