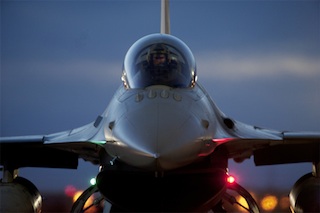 Fighter jets escorted a private plane to Monmouth Executive Airport in Wall, N.J., on Monday afternoon after the federal government said it was one of three to enter a no-fly zone over the United Nations in New York City.

Lockheed Martin F-16 Fighting Falcons intercepted the three small planes and escorted them to area airports, where they were met and checked by law enforcement, said John Cornelio, a spokesman for the North American Aerospace Defense Command (NORAD). He said there appeared to be no terrorism concerns.

According to the FAA, the 2002 single-engine Diamond Aircraft DA40 that landed at Monmouth Executive Airport is registered to Walter Cannady of Slatington, Pa. Cannady did not return a call Monday night. A swath of airspace around New York City has been restricted because of the U.N.’s 68th General Assembly, which President Barack Obama is attending.

For the complete story by the Asbury Park Press (Neptune, N.J.), click here.