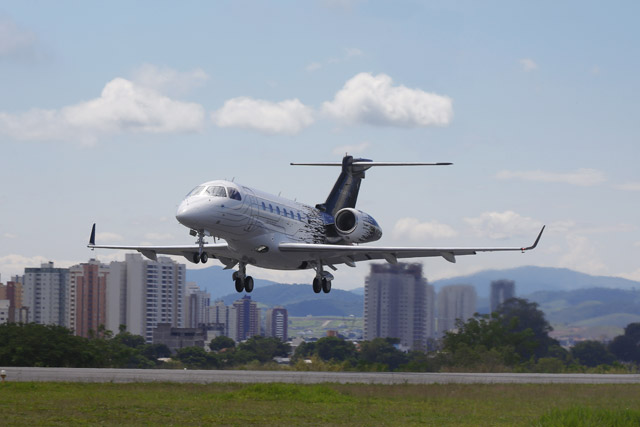 A new generation of business jets was ushered in Tuesday when Embraer’s midsize Legacy 500 made a successful first flight from São José dos Campos, Brazil, marking the beginning of its flight test program. Deliveries of the first aircraft are expected to begin in 2014.

“This remarkable airplane symbolizes the future of executive aviation and is the product of the innovation, talent and dedication that is part of the Embraer culture,” said Frederico Fleury Curado, Embraer president and CEO.

Embraer test pilots Mozart Louzada and Eduardo Camelier, along with flight test engineers Gustavo Paixão and Alexandre Figueiredo, flew the aircraft for almost two hours, performing handling and performance characteristics evaluation. As a result of the extensive simulation use and ground testing, the aircraft was able to cover a significant flight envelope on the maiden flight.  Aircraft systems were assessed including landing gear retraction.

“This is the aircraft that will move us from industry player to industry leader,” said Ernest Edwards, president, Embraer Executive Jets. “The Legacy 500 breaks through the traditional midsize jet envelope to offer something that has never been done before. It is hard to overstate the importance of fly-by-wire technology. Fly-by-wire does for business aviation what GPS has done for navigation. It will empower more precision, efficiency, safety and comfort every time the aircraft flies.”

Capt. Louzada said, “From the minute you enter the cockpit, you can tell this is clearly a remarkable, new-generation aircraft. The flight was a success, precisely according to plan. In fact, it was flawless.”

The Legacy 500, whose spacious, uncluttered flight deck features a side stick controller and the most advanced avionics system available, is a clean-sheet design based on extensive input from operators and customers.

The Legacy 500 is the first midsize business jet incorporating a fly-by-wire control system and full six-foot-high, stand-up cabin with a flat floor. “It has the largest cabin in its class, by far, and provides the comfort and incorporates the technology found only in larger, more expensive aircraft,” Pellegrini said. “It is, undoubtedly, raising the bar in terms of technology, performance, style and comfort for future designs.”

The twin jet will be followed by Embraer’s fourth clean-sheet design,  the mid-light Legacy 450, which will enter service one year later. “Clean-sheet designs are part of our DNA. They are the reason we can be so responsive to customer needs without compromise,” Pellegrini said. Embraer’s popular entry-level Phenom 100 and light Phenom 300 are also clean-sheet designs.