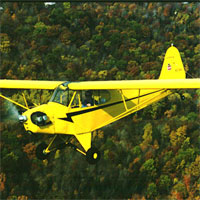 From AvWeb: The last member of the Piper family to head up the legendary planemaker died Aug. 24 in Lock Haven, Pa. Bill Piper Jr. was the son of Piper Aircraft founder William Piper and was president of the company until the late 1970s when the family lost control of the company and management was fired. Piperís memorial was held on Wednesday and featured a formation of yellow Cubs performing the missing man flyby.

Piperís nephew John told AVweb his uncle had a long and fruitful life. ìSadly, it is another indication of a passing era in general aviation,î he wrote in an email. ìOn the other hand, Bill, Jr. and several other members of the Piper family sure had a very full life and played a major role in the development of general aviation worldwide.î

More than 400 people attended the service, which included a vintage Cub hanging over Piperís casket. He was remembered as a man of simple tastes who was unfailingly gracious and respectful of others.

His former lawn boy Nathan Reish told the crowd how Piper not only didnít fire him after he mistook his asparagus patch for weeds, when he graduated from high school Piper paid for him to attend university in Texas, all expenses paid.

Although Piper was suffering from dementia, he remained active until shortly before his death when he fell and fractured his hip. He was expected at a Piper Museum board meeting last Wednesday but was in hospital after surgery to repair the hip