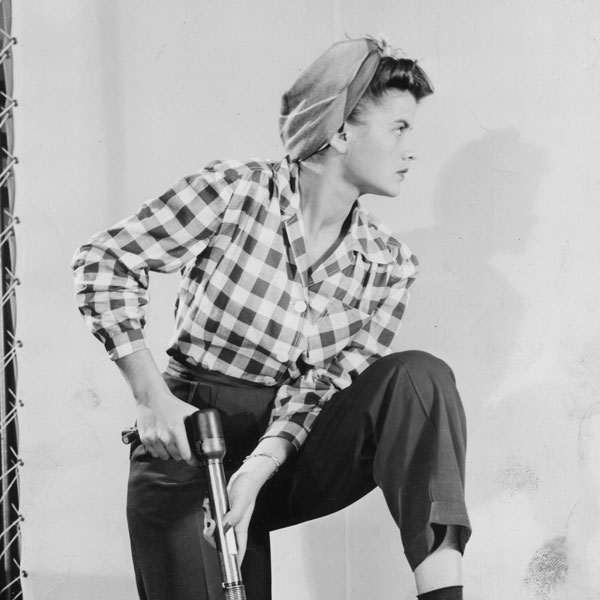 I have read about and seen many images about “Rosie the Riveter,” but my story is unique. I was a model with a rivet gun who worked at a factory, and my husband really did fly the very planes that I was advertising to encourage women to build during WW II.

In 1942, I was living in my hometown of Scranton, Pennsylvania, working in the office at a silk factory, where I was earning $16 a week to help support my mother and siblings. I had heard about other women working in Stratford, Connecticut, at the Chance-Vought factory and making what was considered really good money. My mother encouraged me to go to Stratford to earn the extra money and to have money for myself. The Shelby family, who had four sons, was working there, and the whole family had moved to Stratford. They had bought a large house and were taking in boarders. I found out I could live with them and moved to Stratford to apply at the plant.

I went to the factory, feeling very patriotic with the belief that we could really make a difference in building the Corsair fighter planes. I wanted office work, but there were no openings. They did have a job as a messenger, running blueprints from engineering to the plant, and returning modifications to the blueprints back to engineering. Right away, I was making $30 a week—really good money! I had to run down the stairs from engineering, then across the taxiway where new planes were taken for their test flights to the factory. I saw a helicopter there for several days, which, of course, was a new invention, and a man in white lab coat. I asked someone standing near the building who he was and was told, “That is Igor Sikorsky.” The company had a division called Vought-Sikorsky. The next time I needed to cross the taxiway and saw him there, I said, “Hi, Mr. Sikorsky,” and he bowed to me. That became a routine for the two of us on a daily basis until he was no longer working on the helicopter at that location.

One day, Martha Raye came to visit the factory to show support for our efforts. Several of the girls from engineering were gathered for a publicity photo, which was sort of exciting.

I was going to school at night for secretarial skills in the hopes of finding better work. While I was living at the Shelbys, a new boarder arrived one day from Dickson City, right next to my hometown. When we were introduced, he said, “My, my, my, what have we here?” I figured he was a wolf—little did I realize that I was meeting my future husband! Bob was working in another factory and was about to join the Navy as a pilot. We started dating and fell in love. Soon he left for the Navy and moved to Kansas for flight training. He then went to Pensacola for training in fighters.

Meanwhile, an opening for a typist occurred in engineering, and I was hired. My desk was at the top of the stairs, looking down at the next level. From that angle, the guys would get a good look at my legs, and I got many unasked-for whistles. One day, my boss, Mr. Daley, told me that Charles Lindbergh would be visiting the office. While he was there, I walked up to him and asked for his autograph. He said for me to be quiet about his visit, and he did give me his autograph.

Soon thereafter, I was promoted to secretary for the engineering department. Then one day, Mr. Daley came over to me and said they were looking for someone to pose for us to advertise in newspapers and billboards in Connecticut, New York and New Jersey. They wanted to hire more women to replace the men who were going into the service. I went down to the factory and walked around, noticing what the women factory workers were actually wearing so I could look as much like them as possible. I wasn’t given any instructions on what to wear, although Mr. Daley told me I’d be posing as a riveter. I looked at the scarves on their heads that kept their hair out of the way, bright shirts and, most noticeably, their colorful socks. All the women, of course, were wearing slacks, which were not normally considered “ladylike” in the world.

I bought some items that would work and went to what we called the “4F Department,” where all the artists were working. I never knew if they were truly “4Fs,” meaning not suitable for the armed forces, but all the artists were in that department. The photographer had me pose with the rivet gun with my foot on a box. I was instructed to be looking out into the distance, dreaming that I was helping the war effort, or thinking about my fiancé. I wasn’t paid any extra money for posing. One of the artists, Ray Quigley, drew the advertisement based on that photograph, and it started appearing in newspapers. Ray added the Corsair shooting down an enemy plane, which was what I am sort of looking at off in the distance. I remember seeing the ad on billboards from the train when I went home to visit my family.

I became sort of a minor celebrity as I signed the ads that appeared in the newspapers for family and friends at work. On the other hand, there was resentment from some of the actual riveters that an office girl was chosen to represent them, that I was holding the riveting gun incorrectly and that a real riveter would never be looking away from the work at hand. Such is the price of fame.

I continued to work at the factory until Bob asked me to marry him in 1944. He was then in a squadron in Norfolk, Virginia, flying Corsairs. He had no time off because of the War, so I traveled to Norfolk on the day before the wedding. We were married at 4 p.m., and I remember he was so tired from flying low-level training missions that morning. He did get the next day off for a short honeymoon.

I sometimes wonder how many “Rosies” actually worked at the plant they were advertising, or had boyfriends or husbands who actually flew the planes the factory built. All I know is that one of them did. 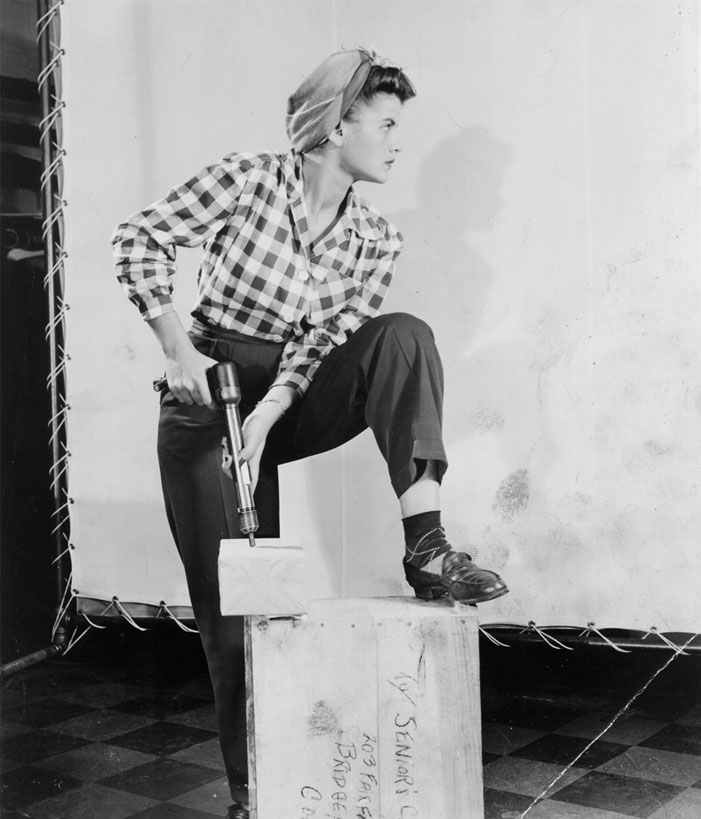 After posing for this advertisement for Chance Vought Aircraft (illustrated by Ray Quigley), Valerie Snowden (left) became a minor celebrity. 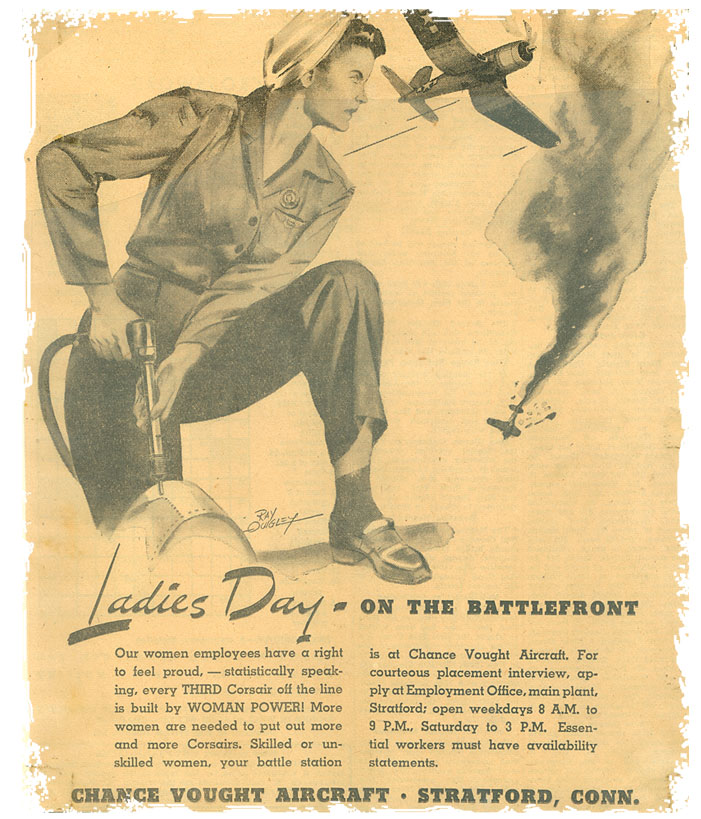